When they talk about this, it's really nothing new, watching Huell Howser's show about the Calif. missions you realize a lot them had been reconstructed several times, some have even moved to other locations I think. But I'll be by when they open. Now if they could only reopen Mearle's in Visalia.

Well there's a small scale one

Like a 3/4 sized Safeway market-Richard Hibbard Chevrolet in Claremont. Oops just thought of another Weber & Cooper Lincoln Mercury (it's something else now-sadly) N. side of Holt Bl. at Mountain Ave. in Ontario. used to have a gold/yellow toned mosaic wall where the fountain(?) is now and raise...


and guess what it's still here!


Phoenix (the bird not the city) will rise again.

first one or a close one to it was built in the 1000 Oaks tract. 2nd one might have been built with a different exterior design and/or was turned 90 degrees to the street so the garage and the hobby room were in the front and the entry was around the side of the house. The plan after that one (3rd) ...

CA. been thru something like this b4 and it's still here.

But yup there is all that white but then again with a kid in the house, ya just know they are gonna think about painting some white surfaces other colors, and get some more kid friendly furniture---wonder how long that white sofa will be a white sofa until the kid makes em decide to recover it in so...

"If that Caliente badge goes -- if it gets corroded, or comes loose -- I was wondering if she could get another one," Hardie says. Well there's always the internet. I noticed in High School in the very early 70's a lotta girls had vintage 60-63 Comets....and my aunt and uncle owned a 60 s...

What a great story of a memory of your encounter with Julius.

I kinda get the sense

that Ardell is from that school

as depicted in Blade Runner

Well there was no

Prohibition on the modernism tour I took a couple years back.
Everyone was taking pics. Carlotta Stahl and her daughter were a most gracious host.

I pass by there

With the real estate bust and all that that goes with it, it's now a vacant lot.

You can see them

On google maps street view, put in Yorktown Dr. San Mateo Ca. The 2 story units are where the street divides with a median. also Torreya Ct. (end of cul de sac) Palo Alto Ca. and Amber Ct. San Francisco (some are attached units) and close to that are some of his multifamily townhome projects. I thin...

Wow. You got a GEM!
Seems to me you don't need to change too much.
So.... are there electric receptacle outlets in the floor of the living room for putting lamps and such in the middle of the room and not having to trip on cords?

Well my memory is corrected... I thought it was the 63-64 world's fair but it's 64-65. I remember being there but it was before the 65 Ford Mo. Co. cars were introduced. Didn't tour the building cause as per the pics the lines were llloooonnnngggg (as with just about every other major attraction the...

But crappy description selling job, whoever listed it shoulda known better.
I guess they figured whether it's relevant or not put certain key words in
(like Eichler) so that it turns up on the applicable Google search. Seems to me just skirts the edge of deceptive advertising.

This can't be the last word can it? Yup it'll be private again but what exactly are the deeds and restrictions on it anyway? Can't they work it out where it's owned like it is now and they 'rent it out' like they other comment posted film a Octomom or a J&K &+8 to raise some revenue.... I me...

Other postings on here, those 'experts' are probably astute enough to find the URL's for ya. Basically I think it's the Woodland West homes or similar.

Weren't 'Craftsmans' 'Modern' in their 'heyday'.
We only call them 'Craftsman' when look back historically.

To the 63-64 NY World's fair but didn't go on many of the rides, the lines were soooo loooong. But I do remember the IBM Egg, the large engine of Chrysler, GM Futurama and Ford's where you rode in 64 Fords thru the attraction.

Wow. I assume the Carousel of Progress is no longer there...? A theater in which the stages stand still, and the audience gets rotated around them. Has there ever been any other theater like that? I think Disneyworld Orlando still has it. but I haven't been there in ages, so rides coulda changed. E...

Regarding the comment about unusable dining rooms I never understood now why there is a 'formal' dining room and a breakfast room. Seems to me to really stretch living space one should have at least a room sized dining area (and my bias is that it always have a window, be right next to a kitchen an...

Those 'vestigial' porches aren't very useful they aren't very deep so putting 'outdoor furniture' on em is moot. But a deep one with a porch swing, that is nice. My grandma's house was that way and our house when we first moved to Claremont had one too.

of those proposals for frame and then modules put on them several times in the past but I have never seen one built yet. There was a pretty wild one proposed for the Venice Beach area.

homes can be put on a lot but the restrictions are per local code. In Riverside county they permit them on lots in many places there are many own your own 'mobile home' parks. And I have noticed on several scattered lots across Los Angeles 'modular' homes have been placed there. Before I got out of ...

I'm actually driving thru the STL area on Tue. en route to INDY, where are the best modern neighborhoods to at least get a brief look at?

On Netflix. Dont forget to check out the 56 Chevy in Pink, Purple and Green. 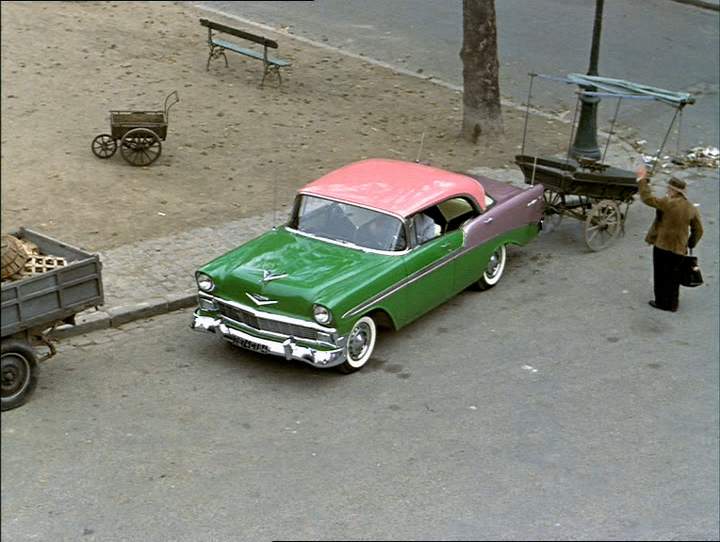