by blackrose
Hi everybody,

I'm new to this forum, but I've been a mid-century modern nerd for a couple years. Anyways, when looking on realtor sites for homes I can't afford in LA (which I do often), I stumbled on this: a 1965 A. Quincy Jones home on Airole Way.

http://901airoleway.com/
by robbhouston
by Stephen
I have to agree with Robb on this one.

This is certainly a beautiful home...but VERY sterile for an A. Quincy Jones home. There are also some other peculiarities. One design element present in most A. Quincy Jones homes I have ever seen is varying ceiling height -- but it's absent in this home. AQJ also seemed enamored with non-parallel surfaces -- railings that leaned, rooflines that started out intimate and jutted skyward to reveal grander spaces.

When I saw the headline (and price) I was really hoping it would be this house, in Holmby Hills:

http://designandmovies.blogspot.com/200 ... movie.html
by robbhouston
Love that sketch! Wish there were some interior shots. I searched for more images, but only found this...

Here it is on the cover of March 2006 Architectural Digest...

If you want more interior shots you should look at the 2005 season of This Old House. They redo a 50s MCM in Cambridge, Mass. One of the "off-site" visits is the Gary Cooper AQJ house in LA. It's over half the episode so look for it on DIY.
by Tony
by Miguel
I believe these are the episodes Steven is referring to: 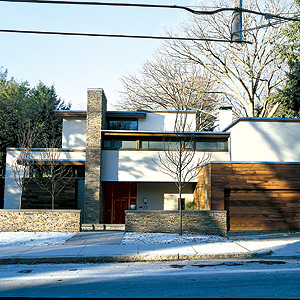 http://www.thisoldhouse.com/toh/tv/hous ... 46,00.html
by nichols
Just to clarify, 901 Airole Way is not the Gary Cooper House.
by Tony
Correct as usual Mr. Nichols.

Tony
by nichols
Thanks, Tony!
More on the Gary Cooper house here: