25 posts [phpBB Debug] PHP Warning: in file [ROOT]/vendor/twig/twig/lib/Twig/Extension/Core.php on line 1266: count(): Parameter must be an array or an object that implements Countable
• Page 1 of 1

http://www.savewright.org/wright_on_the ... w/pew.html
I feel like I hit the mother lode with this website, Save Wright. It's a complete listing of Wright homes for sale across the US. The John Clarence Pew house is absolutely GORGEOUS-OH so gorgeous inside, with its finished wood interior and rock fireplace. Truly ahead of its time for 1938. Right had it Wright!

Couldn't you just see a collection of Roseville Pinecone pottery on display in this home? www.myantiquemall.com/AQstories/rosevil ... ville.html
Top

I used to read the SaveWright board but it was a bit....let's call it "unmoderated".

If you watch the "Wright On The Market" page over time, you'll see some of those listings stay for literally years.

Some posters on their message board have said that once you pay the fee (it's only $250), the listing stays until you tell them to take it down. That has lead to FLW homeowners listing their houses at inflated prices when they actually just want the exposure for their house or *might* sell it if someone came along crazy enough to pay the inflated price.

I seriously have not looked at the site in over 18 months but can tell you that five of the listings have been there at least that long. One now listed as a "recent sale" (Ablin) was "for sale" for 3 or more years.....
Top

Perhaps I wasn't very clear in my post. I wasn't questioning the right of FLW homeowners to ask/expect a premium for their homes. I certainly believe homes by famous architects are worth more than a similar home by an unknown.

My point was only that the list on that particular site should be taken with a grain of salt. The houses listed may not actually be for sale or the listing prices may not reflect real [premium included] value.
Top

http://www.nashvillemodern.com
A little website I created to showcase my home and other MCMs in and around the Nashville TN area.
Top

Hi, gwdiener-Don't worry-you did fine re. making yourself clear. I'm with ya'!

Wright wasn't much into conforming to protocol. I once read about him recounting his childhood experience of walking through the snow with his uncle, and his uncle looked back at the two sets of tracks in the snow. The uncle's tracks were straight while the young FLW's were crooked and all over the place. "Frankie, my boy," called the uncle, "Look at your tracks and look at mine. See how they show how I walked in a nice, straight line, while yours show how you ran left and right, to and fro, all over the place! What have you to say for yourself?" "Yes, dear Uncle, you're right. I DO see the difference in the two sets of tracks!" It was then that FLW resolved NEVER TO WALK in a straight line ever again. (I think FLW had ADHD as a kid!)

I've heard that FLW died penniless. Can anyone elaborate more on that story? I'm curious.
Top

Great house! Very cool what you're doing inside, combing the repros with vintage stuff. Enjoyed the Rockabilly Revival clip too!

I am also a Calder fan! Recently came across a website that features some interesting (Calder like) mobiles.
"The world’s richest nation should be able to produce a free – beautiful – Architecture for individuals – for people – to daily increase the Joy in life." John Lautner
Top

I've been scanning the heck out of a range of issues of The House Beautiful from 1948-- there's an article in the August issue by Loren Pope that addresses this thread perfectly: "The Love Affair of a Man and His House."
(Wikipedia Link for the Pope-Leighy house:
) 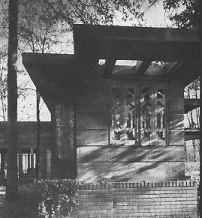 Here's Pope: "We don't think anyone ever built a house with more warnings in their ears than we did. We heard tales about how much more Wright's buildings costs than he figured; how little he cared about his client's means or wishes; and how we would find ourselves with a white elephant on our hands. One of the tale-tellers was an official of the Federal Housing Administration. Among other things, he said that Wright's apprentices (who supervise construction) were cracker-jacks, but didn't know the value of a dollar." He goes on to note construction issues a-plenty, but most of the article concerns how easy the house was to live in. "It not only thrills one's sense of beauty and shelter, but it has every virtue of practicality."

And the kids? Pope writes "For a long time we were baffled by comments from other young parents, who would observe: 'Your house always looks so neat.' We finally realized it was because the house is so uncluttered-- the furniture looks as if it had grown in the room in just the place it should be. And a tangled pool of blocks, dolls, blankets and trucks in the center of the living room carpet gives the impression of only a localized disorder."
Pope also praises the concrete floors and solid walls for absorbing "much of the noisy coursing and clatter of children." And the radiant heating system even kept their dog off the furniture! 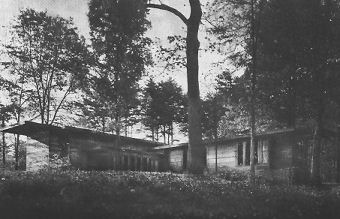 Pope writes that he had no problem selling the house when his family outgrew it, and was full of plans for building a larger FLW home on farmland near the Blue Ridge Mountains. There's no mention of a second FLW house in his Wikipedia profile-- I wonder what happened...
Top

davidk6
Special Secret Modern Agent
Posts: 597
Joined: Mon Aug 25, 2003 12:33 pm
Location: LA one month in winter and one month in summer; NJ suburbs of NYC the rest of the year
[phpBB Debug] PHP Warning: in file [ROOT]/vendor/twig/twig/lib/Twig/Extension/Core.php on line 1266: count(): Parameter must be an array or an object that implements Countable

I can see why some folks

I did a little corresponding with a guy who has done quite a bit of touring (and even renting/sleeping-over) of FLW homes. He has a great website with extensive photos. There are so many photos that it's almost like visiting yourself. Here's the main page...

And a couple of specific pages worth seeing...

Even though his designs may have had issues, I still love FLW...!

Seems like I've hearing his name since I was kid. I remember my dad used to reference him when talking about the contemp/modern house he and my mom designed and built back in the 70s (which we lived in only 3 years before being transfered do due Dad's work). As an adult, I bought (and was gifted with) several books on FLW. And that eventually lead me to a really fun period of discovery over that past few years of other great modernist architects of the 50s and 60s. When I had the good fortune of visiting a FLW designed home myself...

...it was almost surrealistic, after seeing so many photos of them over the years.

Robb, thanks for posting those links-- I had no idea FLW homes were available as short-term rentals! I enjoyed looking at your own site, too; you did a great job with your Nashville Modern.

Thanks for sharing the Beers website! There's a lot there to browse. I especially like Ken Burns' comment about FLW re. how herbs get the best flavor if planted in poor, sandy soil; the struggle for life making a good pesto. "Thar's wisdom in them thar words!"
Top

Very true, re. buying what you like. Often we want to memorialize an artist (or architect like FLW) and...shall we say...glorify them when, in fact, their original intent was to be received more at a face value. (Maybe FLW actually DID want kids to occupy his living space and sprawl their toys around the floor without the threat of it looking cluttered. We want to make FLW's creations into, as I said before, museums. Would FLW turn over in his grave over this?) As per. Warhol, personally I would own one for its investment value rather than for any affinity I have for Campbell's Soup on my living room wall. His work is way-out of my price range, anyway...So I'm not terribly likely to own a 'Warhol'.

25 posts [phpBB Debug] PHP Warning: in file [ROOT]/vendor/twig/twig/lib/Twig/Extension/Core.php on line 1266: count(): Parameter must be an array or an object that implements Countable
• Page 1 of 1