Page 3 of 5
by nichols
I haven't had a classic car in a long time (sniff) but I've torn through a great collection of vintage Chrysler products. My very first car was the best I've ever had, my beautifully dowdy, maroon colored bubbly sedan, the 1953 Plymouth Cranbrook. I loved her so much and we had a great couple of years together - until April 20, 1989 when I had Little Richard on KRLA, In-N-Out in my hand and heading 40MPH downhill when I lost the brakes...

She was totaled.
We bought the car from the family that had rented it out for "Back to the Future" in 1985. 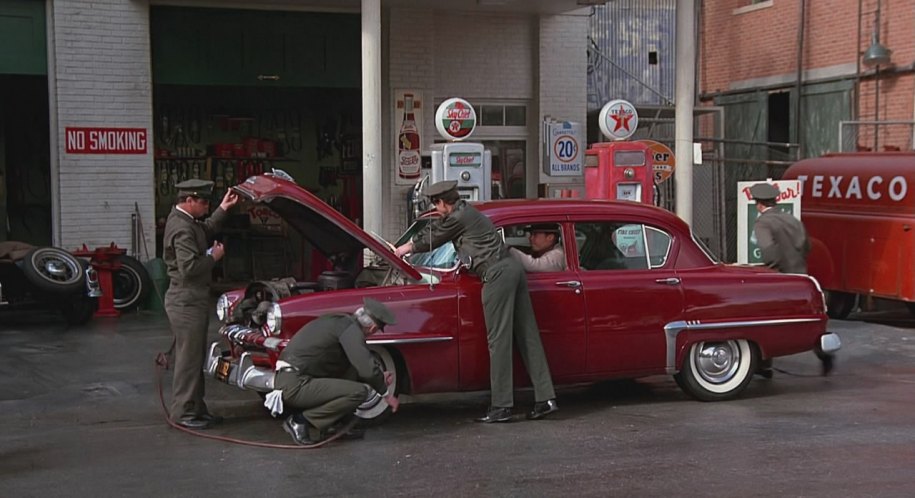 Reminds me of Shifty's coupe, page one of this thread. Quite a pair. I still laugh when I see his first picture: that little puppy looks just like a spaniel with its face into the wind ! Or am I crazy. . .?

SDR
by Sputnikmoss
I almost forgot! White '69 ID19 back from paint, green '65 ID peeking in. You can ignore the two dorks!

photo:Jim Brown
by SDR
by Sputnikmoss
Thanks! I really like the single headlight style the best..they look a little like a 4 door Porsche 911. The later headlight style had a yellow tinted glass cover in the European models which the US didn't allow. Oh yeah...and did I mention some also turn with the steering wheel! We have a set of Euro headlights we are going to put on the '68 which is still in the garage. I'm not sure about the air conditioning...I will ask my husband.
It sure does turn heads!

by SDR
by nichols
Yeah, that is a still from the Cranbrook's appearance in "Back to the Future" in 1985.
by SDR
In the mid-sixties I owned two '52 Dodge sedans in a row; one cost me $60 and one $100. They were great cars; I drove all over Massachusetts in them. Comfortable and dependable; semi-automatic transmission, and the fastest roll-down windows ever !

by Modern Motoring
Well folks, I sold my '53 Lincoln Capri which was in an earlier post. I now own a 1963 Oldmobile Ninety Eight Convertible. here are some pics! by SDR
Sweet. What's the mileage on that pristine beauty ?

SDR
by Modern Motoring
by SDR by Stephen
This isn't my ride, but I'd sure like it to be:

1968 Fiat Dino Spyder
by SDR
Wish I could drive that. I've never even ridden in an Alfa -- of any sort, much less a Ferrari -- of any sort. But my '69 Fiat 124 Sport Spyder was certainly the most pleasurable driver I ever owned. I can just imagine what that Dino, of the same period, must feel like. . .

SDR
by Pal George
hi how do you insert a photo?

by Josquin
by Izzy
of the many classic vw's we've had over the years, this doublecab was by far our favorite. it stings a little to even think we no longer have it. (minus the safari windows)
also had
69 transporter
76 transporter
72 super beetle
65 split window
by SDR
MRU -- I wondered about Jerry Seinfeld's Fiat. As a former multiple Fiat owner I have a particular interest. The model (BTM ?) cited in the media after the event was one I'd not heard of. . .

by tikiriviera
Man, it took me a while to get a picture to post to this forum! Anyways,
below is my new dream car. I figure I might never have the home of my dreams (Eichler), but at least I got the car of my dreams! It's great cruising down the road listening to Sinatra on the Am radio! People love talking about the car, especially older ladies.