by ch
From today's NY Times: 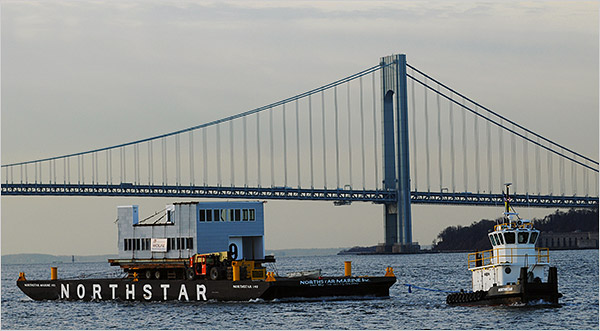 The house floating up the river was well known to many in the crowd, but Samantha Aezen was one of the few who could call it home.

The Lieb House, a beach cottage designed by one of the nationâ€™s most prominent architects that became widely studied as a model of modernism, was nearly torn down. Instead, on Friday, the house continued its unusual interstate journey, plodding up the East River on a barge, destined for a new resting place in Glen Cove on the North Shore of Long Island.

The spectacle attracted a throng of about 150 onlookers to the third floor of Pier 17 at South Street Seaport, including the 83-year-old Pritzker Prize-winning architect, Robert Venturi, who designed the house in 1969 for Nathaniel and Judy Lieb. The Liebs had it built near the northern tip of Long Beach Island on the Jersey Shore. The current owner of the property planned to demolish the structure, prompting the unusual rescue effort, which involved selling the house to an owner willing to relocate it.

Standing next to his wife and partner, the architect Denise Scott Brown, Mr. Venturi ignored the tangle of microphones and cameras thrust in his direction at the seaport, and applauded and waved with a weak smile as the 1,500-square-foot house and the barge carrying it came into view, wending its way northward propelled by a tugboat and trailed by a helicopter.

The new owners of the structure, Deborah Sarnoff and her husband Robert Gotkin, stood a few yards away from Mr. Venturi pacing nervously as their new guest cottage sailed by. They live in another Venturi-designed home, and are paying the moving costs, which are somewhere in the low six figures.

Students, architects and friends hung over the pier rail to capture the moment with cameras, and watched through binoculars as the house and barge faded into the distance after passing beneath the Brooklyn and Williamsburg Bridges.

"I had to come,â€￾ said Yoshi Tsukamoto, 43, a Tokyo-based architect, who learned about the move during a visit. â€œVenturi is very famous. Iâ€™ve seen the Lieb House published in magazines. Iâ€™m so much influenced by him. This is once in a lifetime â€” something very special.â€￾

Michael Blasberg, a freelance architect with the Manhattan-based firm of Weiss-Manfredi, said he had been following Mr. Venturiâ€™s work since college. "I used to make pilgrimages to see his buildings,â€￾ said Mr. Blasberg, 61. â€œIâ€™d rent cars. So I saw this house in New Jersey. Iâ€™m a little nostalgic about being here."

Fred Adelson, an art professor at Rowan University in Glassboro, N.J., who got up before dawn to make it to Pier 17 in time for the float-by, said he had been preparing to write an article about the 40th anniversary of the Lieb House when rumors started circulating that it might be destroyed.

"This was a major monument in New Jersey architecture," he said. "New Jerseyâ€™s loss is New Yorkâ€™s gain. The important thing is that itâ€™s now getting the attention it deserves."

The twenty-hour journey ended shortly after noon, in front of a crowd of about 130 at the new site in Glen Cove. The owners opened their property to the public for the occasion, attracting a mixture of friends, neighbors and local politicians, who drank hot chocolate and nibbled on cookies shaped like the giant â€œ9â€￾ on the front door. The house was taken off the barge and moved to a small plot about 50 feet from the main house, where a foundation had been laid in the winter-burned grass. For the next week or so, it will be propped up on pilings as plumbing and electricity are hooked up.

â€œIt looks terrific, Iâ€™m a little speechless,â€￾ said John Halpern, who is working on a film about Mr. Venturi. â€œThere no damage, not even a glass, not even a scratch. It looks like itâ€™s been unwrapped from a box.â€￾
by rockland
Great story. It was even on 10/10 wins weather and traffic on my travels
home just minutes ago. I adore the attention.
And the verbal excitement of the owners!
Any save from demolition or remuddled is a win/win situation.

I hope to see more of it's new location. And the interior.

I'm not a big fan of it visually but not really important.
Saved and loved. A classic modern coastal New England beach house.
Cheers by davidk6
by hood
Both New Jersey and New York were originally New England colonies....UNTIL Boston arbitrarily decided to kick them out because New York City became bigger and better than Boston in their estimation. Considering the King of England made them part of New England in 1688 and that they are both "New "English Towns" I am going to say yes they are part of New England.
by davidk6
by peterm
i am curious, as a southern californian, is it now considered antiquated to use the term "new england", and more up to date (and possibly politically correct) to say "northeast".
by hood
yeah i guess i was just pointing out that it was historically factual to call them New England. Not that matters really to original point of the post. Why are we talking about New England again.

Anyways the picture of the house on the barge is crazy.
by ch
Not to beat a dead horse, but...

I was born in New York State and lived my young adult life in New York City - and at no point ever considered either to be "New England."

I now live in Connecticut, which most definitely is.

There are many differences in attitude, state government, philosophy, etc. between the New England states and say, NY, NJ or Pennsylvania.

To me, the New England states are a subset of "the Northest."
by hood
by egads
by rockland
by davidk6
All times are UTC-08:00
Page 1 of 1
Powered by phpBB® Forum Software © phpBB Limited
https://www.phpbb.com/