Julius Shulman
October 10, 1910-July 15, 2009 Renowned architectural photographer Julius Shulman died in his home last night at the age of 98. In January, editor Mary Melton profiled Shulman, who defined L.A. in images and exported the city’s mythology to the rest of the world. Read her profile—and see a slideshow of photographs from his 73-year career—here

http://lamag.com/featuredarticle.aspx?id=11972
by Thoroughly Modern Michael
For the world, Julius was an incredibly gifted photographer, who brought humanity to the world of architectural photography and spread the gospel of Southern California modernism around the globe. For those of us that were fortunate to have known him, he was an amazing person who truly believed in the art of communication. He loved bringing people together, and like any true modernist, his focus was always on tomorrow, not merely the celebration of his illustrious past. He was a dear friend who I will miss greatly.
by Perks
Sad to see such a legend pass. Though I never had the chance to meet him personally, Julius' passion for photography helped me learn much about the architectural arts and, by extension, about him as well.

by scottkaycee
Oh what a sad event. I had the honor of meeting Mr. Shulman and visiting with him several times . I was an Architecture student at Cal Poly, Pomona when I was lucky enough to attend a series of lectures given by Mr. Shulman. They were spread out over a series of consecutive Saturdays at his "Soriano-designed sanctuary". He would just talk and it was like listening to Moses, he could talk in such detail and bring the photos to life with his stories. He was able to arrange tours of the Stahl house with Pierre Koenig(another sad passing, a kind, warm gentleman as well) and a visit to the Chemosphere. Don Hensman(yet another sad pasing) attended that talk. This all happened back in 2001. To be able to walk these legendary sites with the master himself to hear him recall his photo shoots, priceless memories worth more to me than most of my education. At the end of the lecture series which I had been videotaping(I was too naive to keep a copy of the tapes, I gave them to the instructor I had been filming them for) I had the honor of driving Mr. Shulman to the final event of the lecture series at Cal Poly. My future wife and I picked him up at his Home. I had a 1996 Lincoln Town Car at the time, it was a fairly comfortable car to escort Mr. Shulman to Pomona. Another Cal Poly instructor Bernard Zimmerman, decided to join the carpool. He ended up sitting in the back with my wife, and I drove with Mr. Shulman in the front. The 45 minute drive was something I should of recorded, as we made the trip from Hollywood to Pomona Shulman and Zimmerman(a character in his own right who knows EVERYONE in LA architecture) recalled their lives in the city as each significant building would trigger a legendary shared experience. Mr. Shulman joked how my car had become historic because of the conversation that day. He was always gracious and it was a pleasure to be in his company. It was especially comforting as during this time my dear Grandmother passed away, and it was nice to have something to get my mind off that event and be in the presence of a mentor like figure.

A few years later (2007) I found myself at a firm with a bunch of guys who wanted to buy the boss a copy of NEUTRA:the complete works or CASE STUDY HOUSES for a christmas present, at the time they were between printings, or the availability was somewhat limited. I remebered how open Mr. Shulman's policy was, at the lectures he always invited us to come back, even if we just wanted to read through his book and magazines in his study. He was always the missionary for Modern design. I volunteered being a new hire that I might be able to arrange a signed copy for the boss. I wasnt dropping names it seemed like it would be a great gift. Well Mr. Shulman was listed in the phonebook, and answered his own phone. I explained what I wanted, he said print out a copy of the retail price of the desired book, he promised Mr. Taschen he would sell them at cover price, and to call back after the holidays to set up an appointment to pick up the book. Somehow a book picking up turned into a field trip. Worried I was imposing on Mr. Shulman's generosity I called him up and explained how a few people wanted to come, he had a more the merrier attitude. When we got there we were sure we would get the book and leave, he was very busy and we didnt want to impose. He said, "Well, sit down..." and proceded to talk about his life and work, he brought out his original camera which started his career the one from the Kun house which he kept in a drawer in the desk. He wanted to know what we did, we were a design team for a firm which did Wal-Mart Supercenters. The boss had done the Modernesque Palm Springs Wal-Mart, at first we tried to be vague about what we did "Shopping Centers", Mr. Shulman pressed and he seemed genuinely intrigued at what we did, he was so open minded and there was no sense of what we did was unworthy. He was intrigued that we had tried to do (wher possible) some modern Wal-Marts. We ended up having to excuse ourselves we were on an long lunch break and had to get back to work but he would have talked some more. His open door policy made me look good at the firm but it was no achievement of mine he was just that generous with his time. To be in his presence was always a delight. It's a sad day now that he is gone.
by rockland
NY Times. Includes a nice slideshow. 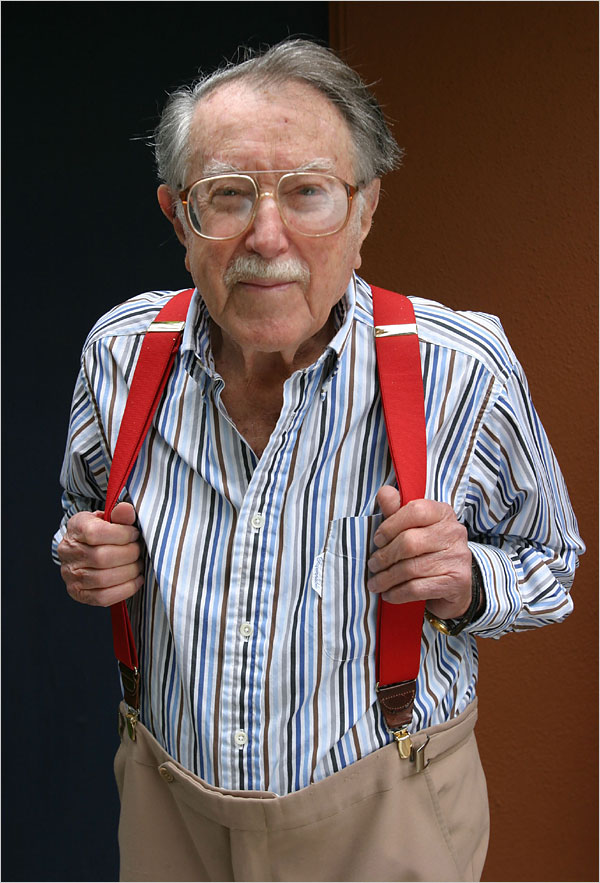 by BAZ_MCM
Heavy heart has been lightened by hearing and reading such great tales of Shulman's personality and vitality.

My preservation question now arises; What will become of Shulman's house? It's the last un-altered Raphael Soriano home in existence. Has anyone heard anything?

by losfeliz
I loved him.

by modfan
What a great story of a memory of your encounter with Julius.
by robbhouston
by peterm

by JGropp
Julius Shulman, Photographer of
Modernist California Architecture, Dies at 98
Andy Grundberg in the NYTimes 7/17/09:

"Julius Shulman, a renowned architecture
photographer who depicted modern houses
as the ultimate expressions of modern living
and helped idealize the California lifestyle in
the postwar years, died Wednesday at his
home in Los Angeles. He was 98". 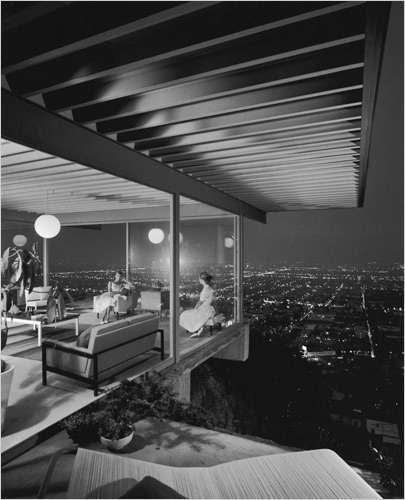 by khummer
What a man who made images classically cool and made mid Century architecture go up in price based upon capturing a strong sense of cool and hip. Amen to that!
by nichols
Mary Melton on Julius. That party was a huge hit, a lot of fun. There were three salutary cakes! I helped him to his car and gave him a hug. It was the last time I saw him.