Trader Vic's to be demolished?

by tikiyaki
by Futura Girl
so now is the time for all good men and women to come to the aid of their ModCom.
don't chat online. don't just show up at meetings.
Write the letters of support and show up at the hearings and lend whatever talents you have - not only for Vics, but every other building on our endangered list.
I suspect we're going to need a volunter captain to help coordinate efforts on this like Rebecca has done for the Save the Derby. Tikiyaki - sounds like this might be right up yer alley?

Adrienne, nix - what happened at the BH planning meeting last tues?
by tikiyaki
by nichols
Nuthin' is goin' nowhere this weekend. I've heard horrible reports of people stealing interior parts. That's the WORST thing you can do. Don't even think about it. The restaurant is not being demolished today or tomorrow.. We're going to be trying to prove it's importance and having it stripped down and ratty looking would not be the way to do that.

The Planning meeting was informational only. No one was allowed to comment. The developers presented their plans and the city watched.

We are going to be talking with the Oasis people soon and explaining our position. I'll post all news as it becomes available.

Otto and Sven know about it. I'll tell Shag. The divergent communities that want to see Trader Vic's stay standing need to come together under an umbrella group. That is coming together soon.

Thanks.
by googiejackalope
As I posted over in Tikicentral, could TV's Route 66 connection be of use? It is the oldest tiki bar on Route 66 and would be the *only* one remaining if not for a newer neo-tiki place that just opened. I blogged my very brief TV visit here: http://thelope.blogspot.com/2006/02/lop ... te-66.html
You can see the Tikicentral discussion on TV here: http://www.tikiroom.com/tikicentral/bb/ ... =1&start=0
by Futura Girl
FROM Marcala: (moved from another post)

KNBC 11 pm news had a quick story telling of the "possible" conversion to condos. Colleen Williams said "NO firm plans have been made" of what could possibly happen with Trader Vics. She said preservationists were keeping their eyes on the situation.
by nichols
Model of plans for the Beverly Hilton site: by nichols
Buy this original ad for $20! 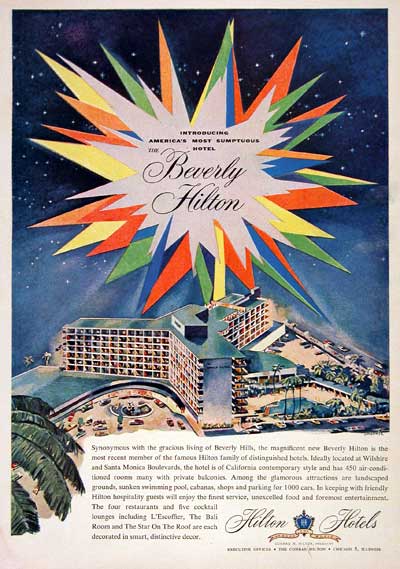 by Deco Lover
The proposed redevelopment of the Beverly Hilton and Trader Vic's
site look like large "sentry towers". Are these new condo buildings
being built for the protection of hotel guests? The size of the curved
building at the corner of Santa Monica and Wilshire Boulevards,
is too large, and will block views and sunlight. The model of this
proposal doesn't even reflect the new luxury condo complex that
will replace the neighboring Robinson's-May department store.

Imagine the traffic gridlock when this corner is complete!

by Lynxwiler
by tikiyaki
by Rach
I was very sad to hear this news. I have only been to Trader Vic's a few times and I always rave to my friends how great the decor and over all atmosphere is; but I was really waiting for my 21st birthday, in November, to have a real bash there. I guess that wont be happening anymore

by CapitalMod
by nichols
http://www.beverlyhiltonoasis.com/
by Tony
by tikiyaki
Please note that there is a link called "TELL YOUR STORY" where you can tell the current owners how you feel. I wrote them something. They need to know how important Trader Vics is.

Also note that in the entire "History of the Bevery Hilton" timeline, there is NO MENTION of Trader Vics.

F*ckin A**holes !
by Joe
by MsJVonFink
by Lynxwiler
The city of Beverly Hills has just released a Notice of Intent to Prepare an Environmental Impact Report (EIR) for the proposed mixed use development at 9876 Wilshire Boulevard (The Beverly Hilton Oasis).

The notice states that with the exception of the 8-story main hotel tower, all buildings surround the hotel will be demolished to accomodate â€œluxuryâ€￾ condominiums and â€œluxuryâ€￾ hotel/condominiums suites. The public meeting will outline the proposed development and the public will be given a chance to voice their opinions on the matter.

The city also invites written comments which should be mailed as soon as possible and at least no later that October 11 when the EIR begins. You may write to:

emails may also be sent to: HiltonHotelComments@beverlyhills.org

So start writing your letters!
by ChrisLAXEncounter
Are there issues to emphasize in addition to:

traffic congestion,
set backs from street,
historical nature of the structure
by Lynxwiler
Save Trader Vic's!

So the issue may not be an environmental concern but the historical nature of the hotel and restaurant must be addressed. Where else if not in the EIR?
by amyg
I sent a letter to the above email address. I hope that gets it to the right people. Here it is in case anybody would like to use it. Probably should change some stuff tho if you do.

I am writing so my opinions may be considered in the Environmental Impact Report for the proposed mixed use development at 9876 Wilshire Boulevard (The Beverly Hilton Oasis). What a shame that we are going to lose one of Southern Californiaâ€™s greatest examples of Tiki culture, Trader Vicâ€™s!

Trader Vicâ€™s is an important part of our rich recent history and culture. Beverly Hills is a young city and we donâ€™t have 500 year-old structures to tell our story. We must preserve our recent past because it is our only history. We must see the importance of significant places like Trader Vicâ€™s now or we will never have a sense of history even 500 years from now.

The chain is experiencing a resurgence and opening new locations all the time. A new generation is discovering Tiki for the first time and, of course, loving it. It doesnâ€™t make sense that an area like Greater Los Angeles, which probably was instrumental in creating worldwide interest in Polynesian culture in the first place, will be one of the few places without a Trader Vicâ€™s.

I grew up in Southern California and I just canâ€™t imagine driving on Wilshire into Beverly Hills without being welcomed by those wonderful tiki decorations out front. This is a true landmark and Iâ€™ve seen less important structures get landmark status. I implore you to rethink this demolition and save Trader Vicâ€™s! I know others feel as I do and I hope they speak out.

Here is his text:

I am writing in support of retaining the current buildings at 9876 Wilshire Boulevard.

These buildings which include Trader Vic's give Beverly Hills a significant part of its history. The ability of the public to share in the vision of Conrad Hilton by viewing the Beverly Hilton is both of historic and civic value.

Should the proposed development move forward it would cause the destruction of Trader Vic's - one of the last remaining original tiki-themed restaurants- and would hide from view the crown jewel of Conrad Hilton's visionary chain of world-class hotels.

Should the proposed development move forward, the people of Los Angeles would experience another loss of their history and part of the region's civic pride.

As a resident of Los Angeles area for the past 20 years, I respectfully request that the proposed development not be approved.

"behind the scenes" or "out in front"?

by Rebgoodman
Now here is one to ponder ... or, better yet, take action on ...

Last I heard from some key upstanding members of ModCom, this issue was under control and being handled - - behind the scenes - - quite effectively, thank you.

Personally, it would seem to me that a grand tiki location like Trader Vic's wouldn't mind strong public action - - out in front - - coming to its aid, yes?
by nichols
From the Art Deco Society

The ADLSA closes out what is traditionally one of the hottest months in L.A. by heading over to world-famous Trader Vicâ€™s, at the landmark Beverly Hilton hotel, for some cool tropical cocktails*, and Tiki-licious dÃ©cor. Famous as a favorite hangout for Frank Sinatra's Rat Pack, the Polynesian-themed restaurant, along with the rest of
this Welton Beckett-designed complex, could be facing the wrecking ball if the results of an upcoming EIR looks favorable on the hotelâ€™s ownerâ€™s proposal. So come join us as we Art Decophiles see what the modern world has in store for usâ€”and support the L.A. Conservancyâ€™s Modern Committee (http://www.modcom.org) in opposing the demolition.

(*Ask for the Mai-Tai as Trader Vic himself intended it.) http://www.tradervics.com/maitaistory-0.html

Parking available at the hotel and there are metered lots along Santa Monica Boulevard between Linden and Bedford.

Reaction to planned razing of Trader Vicâ€™s is muted

By EMILY BRYSON YORK
Los Angeles Business Journal Staff
When plans to raze Trader Vicâ€™s at the Beverly Hilton came to light in April, local fans of the Polynesian-themed landmark watering hole seemed to heave a collective sigh of disappointment.

And thatâ€™s pretty much been the extent of it.

According to Jill Collins, president of the Beverly Hills Historical Society, the missing outrage at losing a bit of local color isnâ€™t uncommon. Only five buildings in the city have historical designations and all of them are city-owned.

Even City Hall, which celebrates its 75th anniversary this week, doesnâ€™t have a listing in the National Register of Historic Places.

â€œThe most we can hope for is some pictures of the old restaurant in the new building,â€￾ she said.

Still, itâ€™s not a done deal. The project, which is beginning its environmental impact study this week, will have to go through a public review process. Collins said that if there were objections, theyâ€™d likely surface at that point. Beverly Hills City Hall, the Beverly Hills Historical Society and the Beverly Hills Municipal League would seem the groups most likely to get involved â€¦ or not...