The 1949 Bond Clothing store at 6363 Hollywood Blvd. -in recent years home to Antenna - has been leased to nightclub operator Sam Nazarian.
(read about him here) http://www.findarticles.com/p/articles/ ... _n12934957 who wants to build a great big three story mega Sunset Strip style club there. The original Shelter (Once Coconut Teaszer) is now another Nazarian club called Privilege.

This store is in great condition with a mostly intact interior. Nazarian has had trouble converting this into a bar called Shelter II. There is a piece in the business journal this week. http://www.labusinessjournal.com/articl ... aID2=97264 Bond, you know, Bond... like the one in New York Times Square 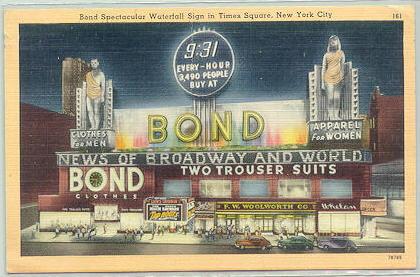 
Sam Nazarian is learning the hard way that the path to becoming a nightclub magnate in Los Angeles isnâ€™t all glitter and glam.

The budding nightlife entrepreneurâ€™s company, SBE Entertainment Inc., is attempting to weave together a network of flashy restaurants, swanky clubs and hotels across L.A. County â€“ most styled by renowned designer Philippe Starck.

However, Hollywood, of all places, may be jeopardizing that vision. The community, which has been revitalized by nightclubs, is giving Nazarianâ€™s company its fiercest resistance yet â€“ to a $10 million, three-story nightclub at 6363 Hollywood Blvd. called Shelter II.

Nazarianâ€™s company directed all calls to Reza Roohi, president of SBEâ€™s restaurant subsidiary, who acknowledged that the firm had never witnessed such resistance.

â€œEverybody is opposing it,â€￾ said Roohi, who was locked in meetings last week drumming up support for the project. â€œEverybody is going crazy.â€￾...

I pray they don't get away with it. Nightclub developers tried to do it with the Vogue theater but failed thanks to help from the city council and Musso Franks. Read about it here:

I live in that immediate area and it's starting to get way out of hand:

Hollywood now has a lovely little phenomena I call the 'drunky-hour' between 2-5 AM. Now occurring every night, LIT TO THE GILLS nightclub patrons singing, screaming, fighting and having one last bit of very LOUD fun amongst the densely populated residential buildings. Earplugs are starting to move units around here I'm sure.

Another fun development is the auto-valets dangerously screaming around neighborhood corners in people's cars trying to increase tips.

Lest we forget the now oft sighted reminders of all that fun the next morning, ah yes, lovely regurgitated gifts left behind by all those fancy new visitors revitalizing Hollywood.
Top
Post Reply
2 posts • Page 1 of 1