The Wildwood Diner in the heart of Wildwood NJ was incongruously razed this past week during the peak of the summer season.
Despite a given it was due to fall, no media, "preservationists", historians nor concerned parties had come forward to document its important past social history, architectural merit or imminent demise. (Some locals did take demo photos which immediately popped up for sale on the internet......). The diner hadn't been open since operating sporadically in 2005.
Its the latest important loss among hundreds of mid-century structures, mostly motels, that have fallen on the island of which only a noteworthy few remain. (The National Trust, in a bizarre long overdue action, put the Wildwoods on its recent endangered list).
The diner was composed of two main sections, an original O'Mahoney in 1957 which was soon after fronted by a larger rare Superior Dining Car Company unit. The interiors of stainless, sturdy formica and terrazzo were still in excellent condition. The deco stainless and turquoise exterior still gleaming brightly and solid after 50 years. Perhaps diner experts would like to add more info here.
A thriving and well-run enterprise since it opened, the 90's saw tough times in Wildwood and after being sold in 1998 the diner was run by a series of owner/operator/speculators resulting in tales of woeful dining experiences.
Local "preservation" individuals claimed to have saved and were moving the diner but it proved to be the usual media spin. Virtually nothing has been saved in the Wildwoods as town officials stand by and watch their island become flooded with tasteless empty condos, many of which have now been tagged with construction violations.
Touted as "saviors of the Wildwoods", numerous 25-story high rises, similar in design to those being proposed in other locales on many ModCom posts, have been approved by planning boards but none have broken ground and are running into permit and zoning problems.
A few older key motels have been re-habbed. A stretch of impressive oceanfront motels of later post-modern vintage, many now going "condotel", are still extant in Wildwood Crest.
Curiously, an architectural tour still runs in the area which now tries to pawn off recent corporate neoned/chrome/cartoonish chain structures as part of their "mid-century" heritage.

For a good photo of the Wildwood Diner, see http://www.ronsaari.com/Stock Images/diners/WildwoodDiner.php
Top

The loss of the Wildwood Diner is very unfortunate. Unlike the surrounding motels that are equally threatened, the diner had the distinct advantage of being transportable. Many diners find new lives in new places, sometimes hundreds of miles away from their original locations. It was listed for sale though the American Diner Museum, but obviously never attracted a serious buyer. This was the listing:

"The Wildwood Diner is a wonderful example of a 1960s remodeling of an older 1950s diner by the Superior Diner Company of Berlin, New Jersey. The diner is located at 4005 Atlantic Avenue in Wildwood, New Jersey.

The main diner is a 16' x 54' stainless steel Jerry O'Mahony Diner built in the 1950s. A vestibule and two dining room areas were added onto the original diner in the early 1960s. The 5 section diner seats 127 customers, 110 booth seats and 17 counter stools. The Wildwood Diner is in excellent condition and must be moved from the existing site. The diner comes complete with all furniture and all equipment.

This wonderfully remodeled diner by one of the major diner manufacturers is for sale for only $5,000 in "as is where is" condition after October 31, 2005. The Wildwood Diner must be removed from the site." 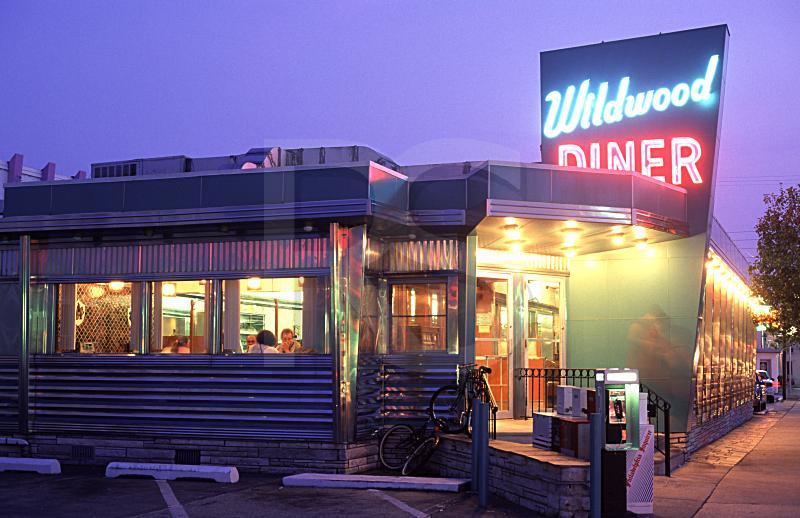 I ate pancakes there a few times at 6:00 AM before going to bed.

This was in the mid eighties, during "a week long drunken sex party in the sun." (My friends name for the trip.)
"Better Living Through Modernism"
Top

I'm a little surprised the Doo Wop Preservation League didn't raise a stink about this. They're located in Wildwood and have the Wildwood Diner listed at the top of their list of area diners. http://www.doowopusa.org/ Did they even see this coming at all?
|
Top