by JAB
I was out at LAX on Tuesday night and just wanted to note what a fantastic Icon the LAX Theme Building is.

by I_LUV_POWER!!!!
I don't know if ts is relevant to the Theme Building, but apparenty there is a restaurant at LAX that Walt Disney Imagineering designed. A concept sketch by Gil Keppler is pictured on page 184 of the book Walt Disney Imagineering, and there are two huge lava lamps (each about the size of an adult person) and spaceships on the ceiling.

I've heard talk over the years about this place (which I think is called Encounters), but I don't know to what extent it matches this sketch. It's been a while since I've been to LAX.

BTW, does anyone know why the moving sidewalks were removed? I miss them. On my last trip there I had some heavy carry-on!
by JAB
The restaurant (interior) designed by Walt Disney Imagineering and the LAX Theme building are infact one and the same.

by I_LUV_POWER!!!!
If one wanted to visit LAX's Theme Building, is there a certain parking lot that you recommend? Do any of the places in it validate?

Thanks!
by ValleyModern
What a gorgeous building! And it is so much fun to enjoy a good dinner there while watching planes glide silently by the windows. There used to be a lot right next to it, is it gone?

It's nice that they valued the building enough to restore/remodel it, but I must say that I don't agree with what they did to the interior of the restaurant. All that post-modern silliness and neo-Jetsons humor create an atmosphere that only seems to poke fun at what many consider to be a truly beautiful and important piece of architecture. A sense of humor and a retro sensibility can be really great in design, though. Go to one of the Standard hotels to see. I think that Disney Imagineering was a poor choice because, perhaps, instead of taking the building seriously, they looked at it as a piece of entertainment like a cartoon or an amusement park ride.

But go, you'll love it anyway. And they make the coolest looking ceasar salad you've ever seen.
by I_LUV_POWER!!!!
I think Walt Disney Imagineering could have done something futuristic without being "neo-Jetsons." Their designs for Westcot (an unrealized theme park which was abandoned in favor of Disney's California Adventure) was futuristic and inspiring as was one of their unrealized plans for "new Tomorrowland."
by Futura Girl
a postcard from our collection:

by nichols
Came across this crazy rendering and thought y'all would enjoy it. 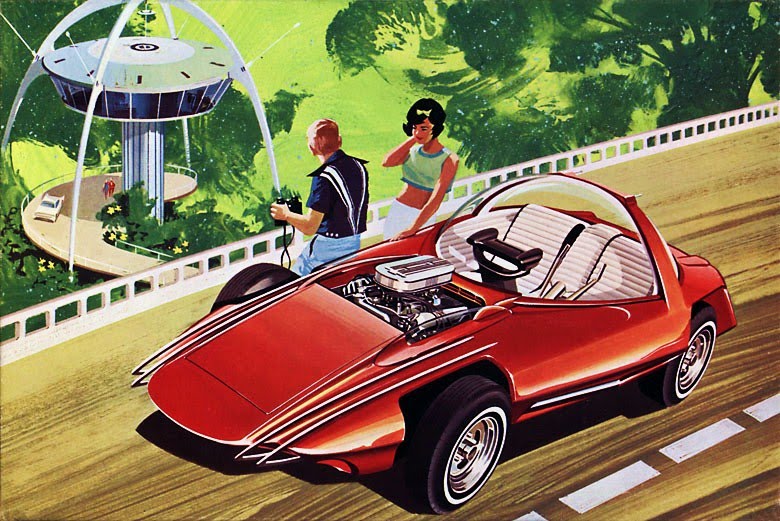 http://magneticbrain.blogspot.com/2010/ ... -lost.html
by nichols
You're also going to want to get this book.

A Symbol of Los Angeles: The History of the Theme Building at Los Angeles International Airport 1952-1961