3 posts [phpBB Debug] PHP Warning: in file [ROOT]/vendor/twig/twig/lib/Twig/Extension/Core.php on line 1266: count(): Parameter must be an array or an object that implements Countable
• Page 1 of 1

Enjoyed this story behind the Morrison Hotel in downtown Los Angeles made famous by the Doors album of the same name over on hiddenla.com. 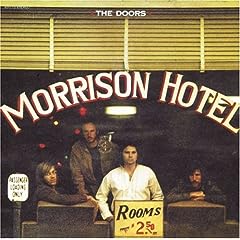 So even after watching the video, you still only put half the name of the album in the subject and in a sense only half an album cover?

It was odd in the video that they didn't use any songs form Morrison Hotel nor Hard Rock Cafe in the sound track.
Top

1969 was the year of Jim Morrison's celebrated public obscenity in Miami, during which hundreds of flashing cameras failed to record the instant at Dinner Key Amphitheater when the singer flashed what legend suggests was a larger-than-average penis. The singer's self-destruction paced that of the band he fronted as the Doors' latest release, The Soft Parade, softly imploded. A Robbie Krieger art project graced by his still-rousing number one hit "Touch Me" and some of Jim's best sloe-eyed poetics on the title track, the band's fourth album was a high-gloss misfire that puzzled their vast, vociferous fanbase. Morrison, a man with seismically shaky judgment in every other matter, then took over musical direction of the Doors and led them back to greatness.

Morrison's evolving bluesman persona replaced his shucked-off skin as the Lizard King, grew him a hairy face, forgave a swag belly, and lent context to his increasingly stewed and wiggy behavior. Tracks for an untitled fifth album were recorded at Sunset Sound late in the year, the vivid aural jottings of a megabuck maudit turned blue and skanky. It was a manic, jaggedly brilliant croon at the devil that was without a title when rock 'n' roll photographer Henry Diltz came into the story.

"The Doors called my partner, Gary Burden, and I about doing their next album cover," Diltz says, settling into an oft-told story, one a bit star-crossed even for Woodstock's official photographer. "We asked, 'Do you have a title? Any ideas?' and no, they didn't. Ray Manzarek spoke up and said, 'My wife Dorothy and I were driving downtown the other day and we saw this little hotel called the Morrison.' We drove down there and took a few shots with just Jim and Ray. We walked into the lobby and they sat behind the window and we shot."

This found-money intersection of the decaying "gentleman's hotel" on 1246 S. Hope St. (on the corner with Pico) and the last name of the lead singer of L.A.'s most decadent rock act was entirely too good to pass up. By January 1970, downtown was well into a post-WW II decline of its own, attested by the bleakly deco "ROOMS From 2.50" sign just below a recently shaved Jim on the cover of Morrison Hotel, Diltz's best-known photograph.

"A couple of days later we brought the whole band down there," Diltz goes on. "We parked the VW van and walked in. I told the guy at the desk we were going to take a few photos and it would take but a few minutes and he said we couldn't without the owner's permission and the owner wasn't there. I thought, You're kidding! It was a transient hotel and it was empty! I saw him leave the desk and get in the elevator. Right on the cover, you can see the lit elevator numbers right under the 'son' in 'Morrison.' I said 'Quick you guys, run in there!' They jumped right behind the windows and hit their places without shuffling and I shot. I shot one roll of film, starting close to the window, and then I backed across [Hope] street with a telephoto lens. So we finished the whole thing in about five minutes and the guy never saw us. We pulled it off though, like a guerrilla photo shoot."

Luckily for the album's conceptual shape, the outing didn't end there, as Diltz remembers. "As soon as we walked out of that place, Jim said 'Let's go get a drink,' and we went to Skid Row, which I believe was on Sixth Street, where it was all bars and pawnshops. We were trying to pick one and on the corner, we see 'Hard Rock Café' and we went in, had beers, and talked to the old winos in there. They loved Jim because he wanted to hear their stories." Henry snapped pics of the band lounging in the Café s Iceman Cometh ambiance. The bar also lent name to side one on the original LP. "Hard Rock Cafe" is a roughneck boozy suite, commencing with the sweat-haunch carnality of "Roadhouse Blues," piling into the blissed-out proto-punk of "Waiting For the Sun."

On "Peace Frog," Jim recites a butcher's bill of: "Blood stains the roofs and the palm trees of Venice/Blood in my love in the terrible summer/Bloody red sun of fantastic L.A." - heaping spastic malediction on the town he was soon to leave. "Ship of Fools" ends the side with a cheery meditation on the end of all us human flotsam and jetsam. Side two is "Morrison Hotel," a series of boozy howls ("Land Ho!") followed by daintily lapped puddles of nectarous sweat ("The Spy") and naked-hippie wonderama ("Queen of the Highway" and "Indian Summer") giving a last phantasmal flicker of romance before "Maggie M'Gill" offers a dirty-blues invocation of a memorable piece of ass. This was barbed and funny and scabrous music for a new, decidedly less hopeful decade.

Morrison Hotel was one of the great reversals of fortune in rock history and a template for the overdriven L.A. Woman, a gloriously lumpy finale to the Doors' career. Jim died in a Paris bathtub in 1971 under circumstances not so much mysterious as inevitable. "The last two [albums], we knocked out in a few weeks each, with the idea being #@$* the mistakes, go for the feeling," Doors' drummer John Densmore tells me, "like we did in the garage." It turned out to be a fateful confluence of events for many.

"When that album came out," Diltz remembers, chuckling, "they got a call from London, from some entrepreneurs who wanted to use the name for a chain. That made their empire. That day was quite an astrological day in someone's life. Out of all the covers I've done, that's the one people remember immediately. When young kids ask me which covers I've done, they don't know the Eagles or Jackson Browne, but on Morrison Hotel, it's d-u-u-ude!"

3 posts [phpBB Debug] PHP Warning: in file [ROOT]/vendor/twig/twig/lib/Twig/Extension/Core.php on line 1266: count(): Parameter must be an array or an object that implements Countable
• Page 1 of 1