by scowsa
Liverpool is my home town and scowsa is the phonetic version of scouser, a person from Liverpool -- also know as a Liverpudlian.

"Lewis’s Department Store is a Liverpool landmark and its history and character has been the inspiration for a series of newly commissioned photographs by Stephen King, capturing Lewis’s fifth floor and the people that worked there.

The fifth floor reopened in 1953 after being damaged during the Blitz. It housed three restaurants as well as a hair salon and it closed to the public in the 1980s. What remains is an evocative space complete with original period fixtures and fittings from the 50s, 60s and 1970s."

In 2008 artist, Stephen King began a photography project around the fifth floor of Lewis’s. Stephen was interested in the idea of a forgotten space and its history.

and that mural!!!!!
by rockland
Wow! Fantastic!
Is a link available for more images?
by scowsa
Here's a link to the photographer's web site. He has a book out so obviously he limits the number on online photos.

by scowsa
On a different but similar note, there is a great book of John Hinde's photos of Butlins Holiday Camps -- a peculiarly British Institution


Martin Parr, my favorite British photographer, worked for Hinde in the 70's and this apparently influenced his "pop color" style.

More at
by nichols
That book is great! I went to the exhibition in Santa Monica in 2003. 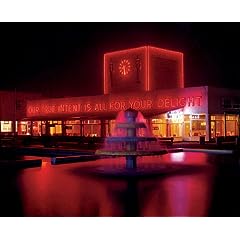 http://www.amazon.com/Our-True-Intent-Y ... 0954281306
by sky
by scowsa
Thanks for the scowsa story and it's perceived link to my avatar. Bertoia dining chairs were our first ever dining chairs, bought from Terrance Conran's Habitat store in Liverpool, and we still own them. Habitat was a large chain across Europe and played a key part in introducing Brits to modernism. When we first came to the US there was also one in Boston (now closed) and we bought Bertoia's Diamond chair in a great vintage store in Boston, Machine Age.

It's a strange coincidence that I read your post just after posting the Quincy Jones house for Gray Cooper, who is your avatar.

http://www.lottaliving.com/bb/viewtopic ... highlight=
by Mod Betty / RetroRoadmap
Thanks for sharing the links to these great photos, it boggles the mind that there are such places just locked up and forgotten about. That's probably one of the things that keeps us "urban archeologists" going, the thought of finding the King Tut's Tomb of MCM!
by rockland
Yes, thanks for the link! (I lost power that weekend and never responded)

I find myself in vacant NYC almost daily. I need to carry my better camera,
but i've got so much already in my pack.
Here is the Rainbow Room a couple months ago.
(i should do a 'guess the pic?' SKY style) by Mod Betty / RetroRoadmap
Now that is gorgeous photo of The Rainbow Room! I'm not up on my history, but what's the latest going on with that space, do you know?
by sky
by rockland
by sky
by scowsa
by sky
All times are UTC-08:00
Page 1 of 1
Powered by phpBB® Forum Software © phpBB Limited
https://www.phpbb.com/