Description: Former home of my beloved Redskins and current home of the Nationals. Along with Dodger and Shea, one of the last Space Age stadiums. Always thought it looked like a Googie flying saucer. 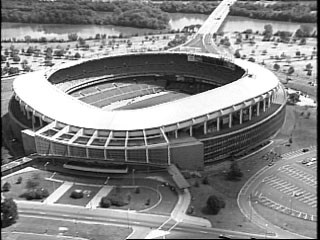 by sky
The year I started GWU, the Senators moved to Texas. And it was impossble to get a Redksins ticket. So, I never got to go to a game there in four years of undergrad.

It was a tough neighborhood then. Is it still?

I know the Cardinals have a new stadium, but did they tear down the 1960s stadium in St Louis?
by CapitalMod
Its still a bit dodgy, but hardly the worst. As with any sporting event, there are loads of cops around. I have walked to games without anything resembling an incident. Yankee Stadium is in the South Bronx and that does not deter the fans.

Yes, they tore down Bush Stadium in St Louis as they built the new one. The new one is nice though.
by sky
What's the point of having a retro stadium when your heritage is mid-century modern? That was a very pretty stadium - a little quirky for baseball because the field was so far below ground level. Does anyone know if the St Loius modern fans put up a fight for the old stadium?
by CapitalMod
I think the issure basically is luxury boxes (i.e. Money), which newer ones are better suited. Also, there has been a backlash against multi-purpose stadiums with most feeling both baseball and football clubs should have dedicated stadiums. The old Bush was multi-purpose as is RFK.

Finally, as we see in nearly every incarnation of MCM, it lies between new and old and is thus condemned as simply 'dated'.
by moderns-r-us
I did see a few blogs lamenting the demise of Busch Stadium in St Louis. It does seem that the multipurpose stadiums, all built within about a ten year period, have mostly met the end of their lives

Kansas City was very fortunate. Even though they were built at the same time as the multipurpose stadiums, we somehow managed to get two separate stadiums side by side.

It was originally designed with the thought of having a rolling roof that could be shared by both stadiums and this idea was recently revived.

It is a shame, but KC is currently kicking around the idea of a downtown stadium again after the rolling roof initiative failed
All times are UTC-08:00
Page 1 of 1
Powered by phpBB® Forum Software © phpBB Limited
https://www.phpbb.com/