I wanted this to have a FLW-ish feel with the suspended rectangles- also to feel as if it belongs to our 1949 simple ranch, and not a Home Despot add-on.


Here is a gallery to the complete build:
http://www.ecreative1.com/galleries/Gate_Gallery/

I was nervous about the red- not very "Pop", but matches the other doors/gates on the house.

What do you think?

Hey guys- thanks for the compliments. My neighbors think I'm a little wacky for spending so much time building a privacy gate.
I can remain objective about their comments pretty easily, though- one of them has a wagon wheel in their front yard

DFWmidmodfan
Modern Socialite
Posts: 63
Joined: Thu Mar 11, 2004 5:57 am
Location: Fort Worth, TX
[phpBB Debug] PHP Warning: in file [ROOT]/vendor/twig/twig/lib/Twig/Extension/Core.php on line 1266: count(): Parameter must be an array or an object that implements Countable

I think it looks very good. If I wanted to do something similar it would have to be mostly wood, since I'm a woodworker and not a welder.

Nice job -- a superior gate ! I like the oxide red -- and it certainly is Wright.

We recently had a dog adopt us; and now, a fence would be a welcome way to keep the neighbors smiling at us as I walk past. But, I despise the affordable off the shelf options.

If I tackled a project like yours I would make my high school shop teacher very proud and my neighbors very happy.
Top

The joy of Designergenes's gates (after the masterful mechanics are absorbed) is the filigreed margin which turns down at the center, providing a peek-a-boo for little ones AND a delightful articulation of the form. . .

For those not blessed with welding skills, a gate that will not sag can be made of wood if it

b) has large areas of lapped right-angle joints that are GLUED with polyurethane or other waterproof glue, clamped while setting.

I'm digging that white tiki mask too! Beautiful job on that gates

Wow! thanks alot for your compliments! It means alot coming from this crowd.
"Whoopin' ass and fussing over complementary color harmonies since 1968"
Top

I agree with googieagog, that the above gate has an asian feel to it. I have read that Frank Lloyd Wright was influenced by japanese house design. The suspended rectangle reminds me of a panel or lantern detail.

I am a designer/metal worker and have built several pieces of custom furniture for clients who requested an asian look or feel to their jobs. Here are some pics:

The suspended panel is a common theme.

AJ, you do metal work? I have a project for you. give me a call or stop by sometime

here's a nice, simple one I saw in Palm Springs. not decorative and rather timeless. powder coated steel and obscure glass.

AJ- those are fantastic! Here's something weird- I was going to build a bench very similar to that for outdoors. There's a little space beside our driveway against a block wall, and under a grapefruit tree. Something really long and low-- square ends w/ that detail. Cool!
I LOVE that table! Very nice stuff.
"Whoopin' ass and fussing over complementary color harmonies since 1968"
Top

I searched my four books of traditional Japanese architecture and furniture looking for examples of the frame-within-a-frame motif discussed and shown above. In over 300 images I found none. Then I looked at a book on Chinese furniture and found one -- on a bed (not identified as to date or province). The cover image shows another, different design, which we might also think of as "Japanese."

This Chinese table, from the same book, makes an interesting comparison to the handsome steel table by A J Fisher.

Great post, SDR!
Yes- FLW's asian inspirations are clear. Very cool.
For the backyard and interior of our home, I try to stay with a south pacific or TIKI feel- just a little more refined.
I considered the design of this gate with a pretty conservative intent. It is about 30-40 feet or so back from sidewalk, but does face the street. The houses in our neighborhood are very simple looking, but do have character (1949-1950). I love the suspended square treatment, because it is a sophisticated statement of simplicity- kind of a worship of square, clean lines- just like the homes in our neighborhood!!
Here are some of my inspirations:

This is a photo a wagon in the basement of a building in Bisbee, AZ

Wow -- nice collection ! I guess my point was Chinese v Japanese; in America at least we are seemingly more aware of the latter, as were those westerners who felt the influence c 100 years ago. But then, much of Japanese physical culture (i.e., architecture, etc) was influenced by the "mainland neighbor." I wonder at the direct ancestry of each of the examples above.

You certainly found more floating-square examples than I did. . .I'd forgotten about the popular pierced-block version ! http://www.lottaliving.com/bb/viewtopic ... 2361#62361

He specifically mentioned -- and depicted --Japanese architecture. His first physical exposure to it was at the 1893 Chicago World Fair. Although the so-called China trade was in full swing in the latter 19th Century, artists in the West (Europe, Britain, US) -- painters, graphic artists and architects, among others -- were being influenced by Japanese prints and other wares, and architecture -- so Wright was not alone in this.

Wright first travelled to Japan in 1905 and spent much of the period 1916-22 in Tokyo for the design and construction of the Imperial Hotel. He bought many Japanese prints and other Asian objects, also acting as buyer for American collectors of prints.

...and is pretty fabulous yet today.
--couldn't resist 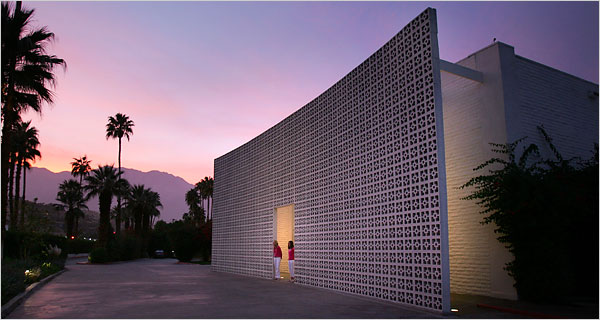 Gates designed for a friend's driveway, illustrating the use of diagonals to resist sagging. . .

Here is an example of a gate by Wright, Jr. for the Lubsen house in Altadena, California. The gate has long since disappeared and what was left of the fence was torn down earlier this year. The house and fence were were very similar to Wright senior's usonian work with board and batten details. I'll post those later.

I fabricated this dual-swing gate last year. It is a vehicular gate intended to keep cars from using the driveway as a turn-around. I think the clean lines and simple form could compliment a mid century modern setting.

Nice, AJ Fisher. The many welded intersections should prevent sagging over the life of these crisp and orderly gates.

I found the rest of my gate set; these, too, rely on "welding" (with polyurethane glue) to resist the vagaries of time and gravity.

The second sheet shows both sides of the same gates.

That's a lovely fence and gate by Lloyd Wright, Josquin. I wonder if that is the Dorland residence (1949, Morada Place).

Note the clever gate framing, which simultaneously catches the mitered face boards where they need nailing and gives plenty of diagonal shear-resistance to the cantilevered gate itself.

From the profile at the edge of the fence, I conclude that the battens overlay the boards, rather than being sunk a la the Usonians. One finds the son not TOO much in debt to The Old Man !

I get a giggle from this pair of gates attached to a local fire station; there must have been a friendly wager by the maker(s) as to whether the design should be built of mitered boards (right) or of parallel verticals. Or maybe one of the gates (guess which) is a replacement. . .

I'll have to go look again to see if the faint diagonals visible on the left-hand gate are scribed or drawn on. . .

SDR
Top
Post Reply
[phpBB Debug] PHP Warning: in file [ROOT]/vendor/twig/twig/lib/Twig/Extension/Core.php on line 1266: count(): Parameter must be an array or an object that implements Countable