Okay- a somewhat mundane topic, but a pet peeve of mine (and others here)...HIDING GARBAGE CANS.

No one particularly likes to drive up to a house and be greeted by an ugly plastic garbage can. Its even worse when the local trash foragers- raccoons, opossum and bears (oh my) knock over your trash and make a huge mess.

The best solution I've come across-other than keeping trash in a garage or shed, is the trash can enclosure. Am in the process of designing one, that will sit near the entry to my driveway (where I must leave the trash for weekly pickup) and am looking for some inspiration.

Please show me where you keep your trashcans, litter baskets and rubbish bins

Came across this pic on the intraweb. Other than the exposed hinges....not too bad 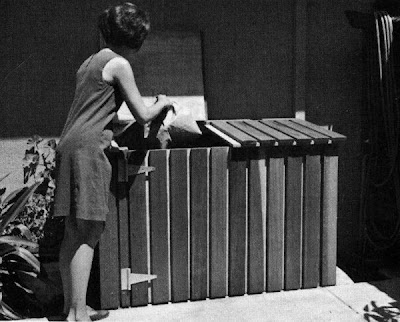 Re: Hiding the cans

I have a similar wooden bin to the one Jesgord posted. But the hinges are
made from recycled old tires. It is in need of rebuilding so i have thought
a bit about this design. A very common bin used in coastal villages.
Shore birds and crows make a mess of it. A bear dragged a bag up into the
woods and made a mess. Moose don't eat garbage but curious enough
tear it apart.
I searched for some photos but came up with nothing.
Trash pick-up can often be random even though a weekly date is scheduled.
Ours is sunday, but sometimes monday. Weather is an issue.

Pick-up can be troubled if you spend long weekends at a 2nd home and
garbage is picked up on thursdays when you are away.

Making one in similar materials to your home would make sense. I'm sure that is in
your plans.

toilet/can confusion? I often wonder why it became so standard to have the toilet in the
room of bathing.
Top

The single most important aspect of any installation, in terms of architectural presentation, is to have the object -- fence, lamp post, mailbox, etc) -- be
level and plumb -- as I see it. (A fence will not be level, necessarily -- but its vertical elements had better be plumb !)

I'm sure jesgord has observed this standard. . .

one of the best solutions I can think of was from my fraternity house in college. it was a Modern design from 1947. the cans were in-ground. you would step on a handle and the lid would pop open. you then bend over and pull out the bag. out of site. only two small round lids at ground level

I remember those, Joe. I wonder why they went away -- too much trouble to install ?

We have automated trash pick up. The city provides the cans. We have two, one trash, the other recycling. Both are quite large, like 95 gallons. Other cities have green waste as well. I rebuilt the fence and extended it almost to the end of the garage. (my rule-never alaign when an additional shadow line is possible) A large, almost 5' gate hides the cans. The previous owner seemed to have kept them in the garage. When we first moved in, they spent most of the their time in the courtyard. So much that when the hidden place was finally ready, the family was not too keen about going all that way to empty the trash. They did get used to it.
Top

yup. The West Side Hwy is pretty arid in appearance and elevated. An occasional weed.
It's been flooded all week.
Top

the underground cans would make automated pickup impossible, no? -- likely the reason for their demise.

in concord, we have city codes that forbid cans in plain sight other than on pick-up day -- not like anyone enforces it, but it's there... while we keep ours behind the fence in the side yard, they're still visible from there, but we can stomach it. i do like the fence-screen idea. our neighbors have that setup and it works well.
--
http://www.redneckmodern.com
Top

My parents had one of the in-ground cans in their 1955 ranch, and it really did work great. It didn't flood even in rainy Oregon because it had some drainage features and was positioned against the house under the eaves of the garage roof. The garbage service managed to render it unusable during the early 90's by inches. First, they refused to lift it out of the pit, which I suppose is understandable from a back health standpoint. Then, a few years after we started lifting it out of the pit ourselves every week, they began charging extra because the automated claw thing on the truck couldn't lift the can. What finally killed it was when Portland went to the multi-can recycling system where the cans are provided by the city (which I do think is a good thing overall). The last I saw it, my mom had removed the lid, filled the pit with dirt, and made a little flower bed out of it... I still have fond memories of removing the garbage can, climbing into the pit, and playing "tank" with my brother (gross by adult standards, but completely righteous if you're 8 years old).

As an aside, I think my apartment here in Stuttgart did a nice job with the garbage/recycling area. This thing is huge due to the sheer volume of stuff it needs to handle (the Germans are pretty impresive recyclers), but a much smaller version placed inconspicuously could compliment certain Mid Century homes by virtue of the the flat roof, long horizontal lines, etc. 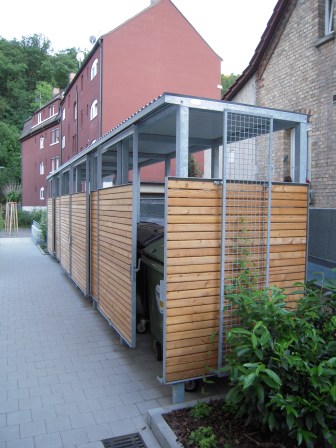 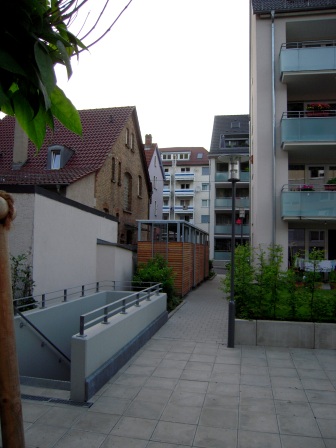 You are born modern, you do not become so.
Top

These in-ground cans...... did they ever make like a garbage soup?
Top

I got worried when I saw a new post in this thread.....I thought this might turn into a debate as to whether "Garbage can be Trash?" or "Trash can be Rubbish?"

Don't fear, I am armed with a thorough etymological background of each term along with quasi-historical information vaguely associated with the evolution of the Trash, Garbage and Rubbish Movements. Bring it on...I'm ready!

All that said, I'm excited to report that my ribbon house numbers arrived yesterday. They will be affixed to the garbage/rubbish/trash enclosure this weekend.
Last edited by jesgord on Tue Jun 23, 2009 10:53 am, edited 1 time in total.
Visit my Blog