Is there such a thing as an original two story Eichler (ie not renovated to add a 2nd story)? I was told by someone in real estate that one might be coming up for sale in mid Palo Alto.

I didn't realize there was such a thing as an original two story. Can someone confirm that these exist, and if so, what do they look like?

I am in a one story Eichler now and am a huge Eichler / mid century fan, but would love a bit more room in the house with my growing family.

Thanks for any info
Top

While I'm not especially familiar with the Bay Area Eichler neighborhoods, I do know that he did build from a small handful of two-story designs in some of his Palo Alto tracts. I recall seeing at least one of the floor plans posted online some years ago, but can't seem to locate anything now. I'll dig around a bit on my computer and see if I can come up with anything.
Andy Perkins, Broker/Owner
Top

You can see them

put in Yorktown Dr. San Mateo Ca.
The 2 story units are where the street divides with a median.

and Amber Ct. San Francisco (some are attached units) and

close to that are some of his multifamily townhome projects.

Eichler did build two story homes, as noted above-- some of which were a product of client-commisioned builds rather than planned tracts. Some of the Eichler built two story homes were simple one floor on top of another configurations, and some were more like split levels where the house sits at two overlapping elevations.

The most interesting example I've read about was in the San Mateo Highlands neighborhood, where some of the outlying houses that back up to the hills were built as original two story homes (a nice thoughtful example of adapting the home to the build-site, I think). I wasn't able to find photos of these, though, and would like to see some if anyone has them. I would be interested to see how this turned out...

There were also some unrealized plans for more expensive two story homes in the Highlands neighborhood that would have been constructed on (rather than backing up to) the sloping hillside in the Northwest part of the site: 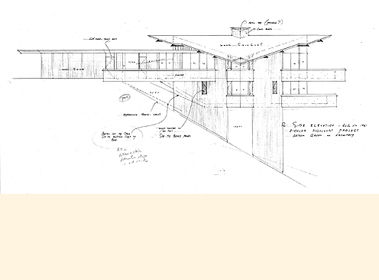 It makes one wonder if there might have been more two story single residence builds on the horizon if the firm had not folded when it did.

Some of the Eichler experts on the board are going to know much (much) more about this than I do-- and please correct me if I have any of this wrong.
You are born modern, you do not become so.
Top