Longtime lurker, finally posting. I recently acquired the house I grew up in, located in Tujunga, CA. It was built in 1966 and while definitely not a MCM by any stretch, it did have lots of contextual touches like river rock out front, a nice river rock & slate fireplace, sliding glass doors, tall windows, etc... In the original state it would have been a great candidate for MCM-ization (or at least, that's what my memory tells me!) Sadly, all of these are gone now (except for the fireplace) as it's been "updated" over the years. I almost can't stand looking at it (literally) but since I did get it for a fantastic deal (thanks mom! just not for the remodeling!) I suppose I'll suck it up and smile. I'll post pics once I get a good "virtual tour" type set - and hopefully I can dig up some photo album pics of the original stuff, too.

In the interim, I've got something that I'd love to get feedback on from this community about (opinions, suggestions, and especially a reference or two if possible!!) I need to enclose the area in front of the front door, in order to create what I call a "catlock," so I can keep the little monsters from running off. You know, so they don't slip past as I walk in with the groceries.

Check it out. I've put a black square where I figure the new stuff will go (note that it's a step up from the walkway).

In the current state, the house is practically ASKING for some crappy typical wrought iron... but I don't want to do that if I can avoid it. I want whatever work I do with this house to be moving towards (back to? heh) something better and nicer, and definitely with a cleaner MCM type mindset.

Cost and turnaround time are important but not dealbreakers - I am aware of the "good, cheap, fast - pick 2" adage. It doesn't have to be floor to ceiling, but it needs to be at least a good 6 feet. The lower areas (at least) will have to be impassable by the cats. The setup will probably have to be a centered door because of where the walkway is situated. The ideas I've been toying with are:

Wrought iron: Perhaps vertical bars with vertical rectangles at intervals? No pic handy, but I bet tikiyaki and other "locals" will know what I mean when I mention the iron on the front of the house on Lowell, on the right side going down towards the 210 from the In-N-Out.
Iron frame with Mistlite-type or clear glass: I like the Mistlite idea because it would look cool at night. AND... might draw attention away from the rest of the house - yuk! Security is not the reason for this install so even clear glass could be acceptable.
Wood: Something simple, vertical 'bars' maybe, an Eichler-esque kind of thing?
Hybrid: My favorite, create a tiny 'atrium' (not even really big enough to be called that) using iron/mistlite on either side of a regular door. I actually think this would be great because it would say "hi, I'm the new (well, returning, I suppose) neighbor and THIS is the direction I'll be taking the house in..."

On top of that, I'm figuring one of three layouts, which I hope is explainable in short text:

Since the walkway off of the step there is centered, I'm kinda leaning towards wall-door-wall for ease of use. However, I'm thinking door-door would be good because it won't limit the opening in case I need to move stuff in/out of the house. Best case might be wall-door-wall with an oversize door? I'm not averse to getting rid of the plants in front of where this door would go (and in the future might even put a further-out "wall" in order to get a proper atrium type space.)

Anyways, I feel like I'm almost over-thinking it, but at the same time I don't want to spend good money on making the house uglier. This is where I want to draw the line and turn this place around, so please, fire away any and all thoughts you may have!!
Top

I don't see a need either but

I know, I know - I truly don't like the idea of wrought iron either; but like I said, I do need to do something there as a 'failsafe' in order to keep the cats indoors.

Here's a wider shot - not wide enough but you can see there's room to do something else here:

I've also considered creating a larger atrium type area, a bit further out front (after removing the excess "foliage" - don't even get me started on the current plant situation!), something along the lines of the redo in this thread: http://www.lottaliving.com/bb/viewtopic.php?t=4481 (third or fourth post down)

But unfortunately right now time is of the essence. Perhaps I'll just get something as minimally ugly as possible up for now, and plan on doing the research and prep to do the front up right once we get settled in. You know what they say, "sometimes it has to get worse before it gets better..."

Might I make an alternative recommendation. I hate the thought of obscuring those cool doors - I really like the unique oval patterms and covering them seems to be a shame to me. My house has thie original gate that prevents children from falling down the floating staircase into the basement area - it's black wrought iron, however it is transparent enough to see what's beyond the opening and stout enough to prevent people from falling down the stairs.

My proposal is some type of half-gate, potentially reusing the front door motif, so that the imagery/patterning is duplicated - as you walk to the front door, the repeated pattern would not look out of place, plus you can still see the "real" entryway as you open the gate. It would look more natural and not look like the add-on it actually is. The trick would be to first come up with a good design and second to make sure the gate is tall enough to prevent your cats from jumping over the top. You could be clever with the choice of materials - how about some obscure glass in a white - something along those lines.

This wouldn't be for everybody, but perhaps this idea would inspire someone to come up with something even better. Instead of the single patter on each door, you could stack two in there. Here's a very rough rendering of what I have in mind: 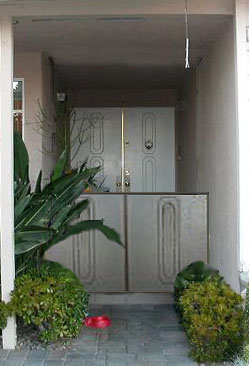 -- John
"Reality is that which, when you stop believing in it, doesn't go away."
Philip K. Dick

RE: wrought iron in LA