by bamalama
I'm listing an issue of House and Garden from 1958 on eBay and as I was busily scanning, this enchanting appliance caught my eye... 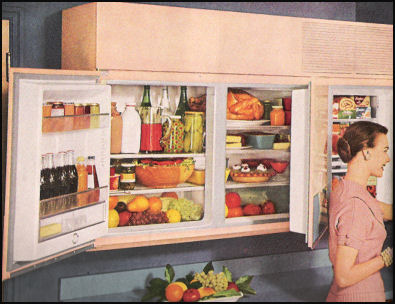 Now, why on earth didn't these catch on?! "Truly, it is the most convenient and magnificent refrigerator-freezer ever produced" reads the ad, and I don't doubt it. The ad also notes that only a limited number are being produced... but why? These things should have taken the world by storm! I did a Google search and found that one for sale (!) on-- you guessed it-- eBay:

A bargain at $127.50. I see model on eBay is Canary Yellow with a Petal Pink interior. I'm swooning.
So, who killed the wall fridge???
by gwdiener
by BOXOUTBM
by jesgord
by Scott NC
by dalangdon
I have one of these in the original pink. It's a great design, but it is - as mentioned - HEAVY, and the amount of food storage space is limited. The freezer is particularly small.

You also need a fairly high ceiling to hang this at cabinet height; Not only do you need account for the compressor, you need an additional 6" or so for wiggle room when hanging - or at least we did, but we are not pros.

Equally cool is the companion cooktop, with the controls built into the range hood.
by cadman

by dilettante
I sure don't want to hijack this thread, but here's another kitchen appliance that was a mid-century marvel - the NuTone Food Center. It's been mentioned in several threads on lottalivin, but I believe this is the first photograph. It's a multi-purpose food processor, ice crusher, coffee mill, meat grinder, mixer, knife sharpener, etc. - with the innards under the counter. The idea is; one motor, lots of special-purpose attachments.

Here's the smooth, stainless steel, countertop surface, speed control on the right and appliance "chuck" on the left, with a circular plastic cover.

Here's the look from countertop height, next to a bar sink:

This unit's about 50 years old, I'd guess, but gets daily use and continues to be a workhorse!
by ch
I did see a modern home in Florida by Mark Hampton that had the white version of this great wall fridge - still in use. I would really like to see this idea revived. I have always hated the fact you really need to dig for your vegetables in most refrigerators.

I think there is mention of having to jerry-rig something together in the restored Koening Case Study House to replace the one long gone.

According to an ad I have the original colors were: green, yellow, pink, blue, brown or white.
by 64Cat
There was one here in Minneapolis. A place called the ReUse Center here in town was selling it from a house they were removing it from.
by bamalama
Craig, that would be Turquoise Green, Canary Yellow, Petal Pink, Cadet Blue, Woodtone Brown or (No Adjective) White!

I'm happy to hear that these units are still being used and enjoyed. As I was lying awake coveting ancient appliances, I thought of another drawback: no access for children.
(Although as a parent of a three year old, this may be a benefit rather than a drawback.) I still think it's a brilliant idea, in the right context.
I scanned the entire ad if you'd like to see this marvel in all of its glory: 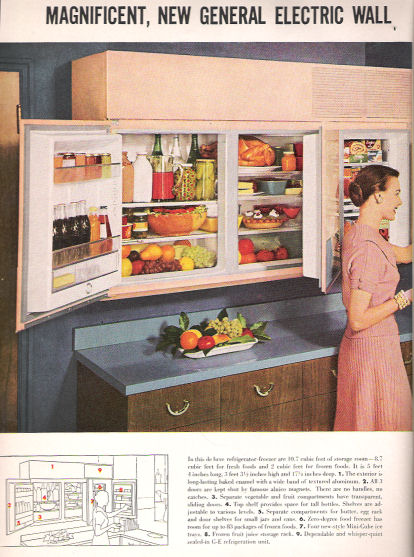 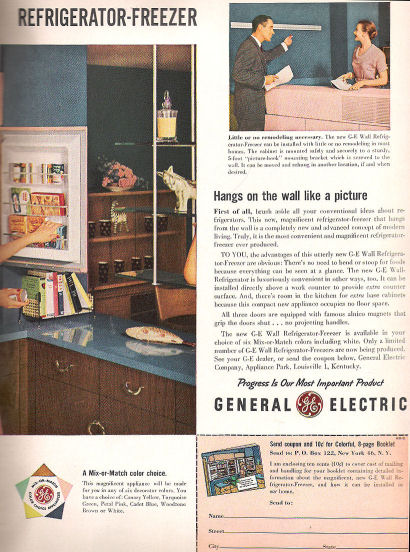 I apologize for the quality of the scans... I'm selling this issue, so I didn't want to shmoosh it in the scanner. Here's a link to the full-size images if you'd like to have a look:

by modfan
On a previous thread but....
There were some neighbors when I was growing up who moved to another house and it had that kind of refrigerator. It's in N. Claremont in that tract I think is called Mural Oaks built by Robert Olin and Ralph Lewis (now KB home). I dunno if all the homes had it as the one they had moved into was customized by the original owner. I think it was the Woodtone brown so it blended with the cabinetry. I think there was one compartment (freezer?) that was in the base cabinet.
by dalangdon
Jean, as luck would have it, I just took posession of one of those cooktops today. I still have to get the wall oven component, but the cooktop is the really cool part.

Bamalama, you mentioned the drawback of kids not being able to get at the fridge. As you'll see in the ad I included in the link, they used that as a selling point for the stove.

Here's some images
http://danlangdon.com/gecooktop.htm
by classicsat
I'd be curious how that cooktop is wired.
I suspect a metal clad whip with 8 or so wires you connect to the hood, which you connect your 30 or 40 amp 120/240V supply to.

Or the power goes to the cooktop and a cable with a number of smaller wires, including 120V for the vent fan and light, with the buttons controlling relays in the cooktop.
by dalangdon

by happy modernists in MN
That fridge is awesome!!!!

I think we have the matching GE cooktop & wall oven for the fridge in the ad. It seems that the styling of the chrome on the fridge is similar to that of our cooktop. It's cool, we love it, but the buttons are the right height for our 16 month old to play with! Who knows, we might be selling these in the next couple of years if we redo our kitchen (we don't have a dishwasher). We have the manual for all the cooktops and ranges made during this time if someone needs a copy.

It's the St. Louis Park folder, the first few pictures. The furniture isn't ours, these pix are from when we bought the house.

Kristin
by KateT(CA)
Happy - I love your pictures! Great dinnerware, too!
by dalangdon
All times are UTC-08:00
Page 1 of 1
Powered by phpBB® Forum Software © phpBB Limited
https://www.phpbb.com/