by bamalama
We just watched the 1966 George Axelrod film "Lord Love a Duck" (hey hey hey!)... Ruth Gordon's house is as swell as I remembered...
Driving up to the house... 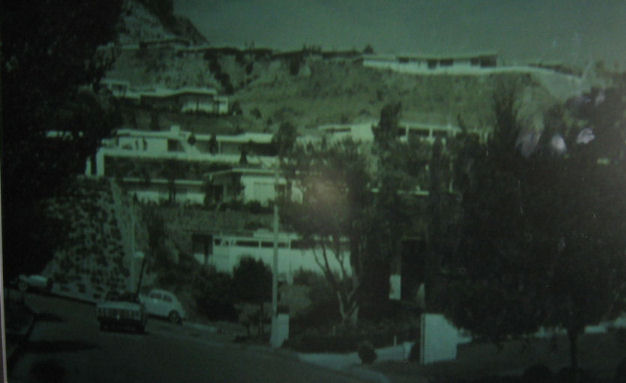 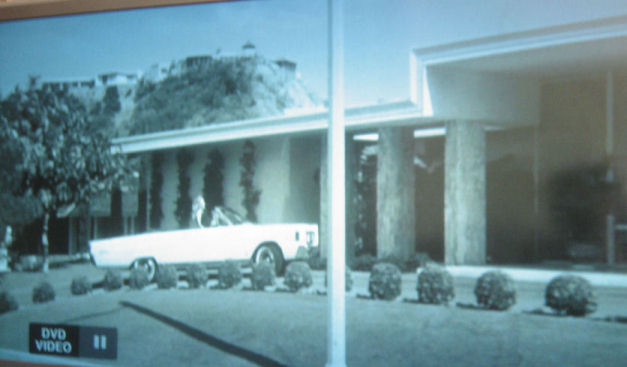 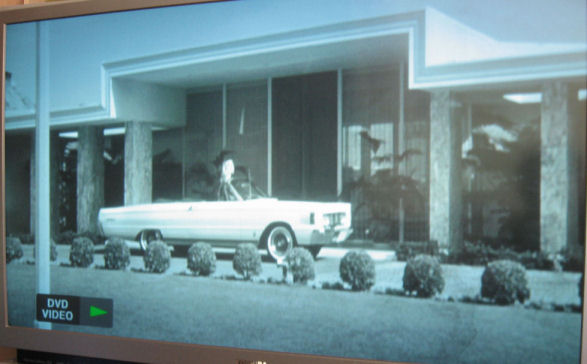 Driving away from the house... 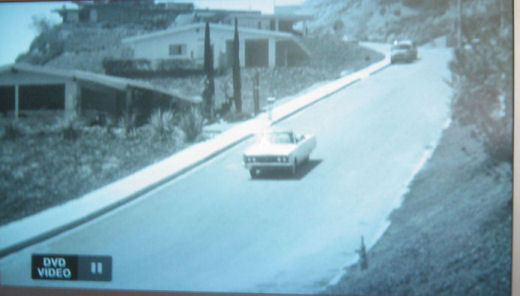 The right turn away from the house... 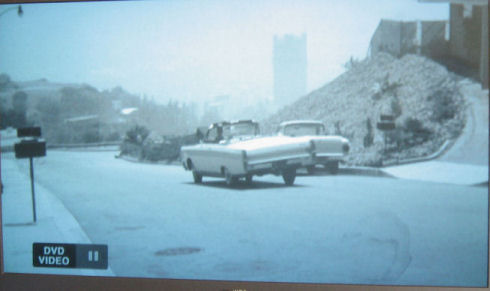 (Love that haze!)
Anyone know where this house is or who designed it?
by home_boy
It looks like that area of Hollywood called Mt. Olympus. It's just above Hollywood Blvd. and just east of Laurel Canyon Drive. It was developed in the early 70s, I think, and all the streets have names from Greek mythology. Hercules Drive is the main street with Apollo, Hermes and Venus being others. I'll try to post an aerial view of it.
by Tony
This looks like Truesdale Estates to me, north of Sunset, west of the Sunset Strip. Can you look to see if there is an address number anywhere?

Tony
by Futura Girl
i was thinking trousdale, too...

by modfan
any way to take a close look at the first pic- like freeze it?
Kinda looks like you can see a street name sign on the light post at the corner on the right side and one where the VW is parked and from the pics here they look kinda light colored like the BH ones, it would be dark blue if it was LA city.
by bamalama
Thanks for all your ideas! I'll watch it again and try to make out some signage after the baseball's over.
by rockabilly
I know almost nothing about specific locations in california, but I did find a spec web page with shooting locations for this film. here is the link:

by 5280mod
Just watched this tonight myself...

loved the kitchen in Ruth Gordon's house, and of course the round "conversation pit" in her living room
by bamalama
That conversation pit is wild-- looks like crushed velvet! I loved how when the action moved inside the house, everyone's voice echoed like they were in an airplane hangar. I think the interiors must have been filmed on a set, though.

When Tuesday Weld's character first sees the house she says "It's so big, and you can see right through it!" A fitting tribute to MCM style!

I was hoping someone would recognize the house right off the bat as it's so distinctive. (It really has that mid-60s savings & loan look.) Unfortunately, none of the exterior shots provided a clear image of a street sign or number, but the street signs did look light rather than dark. The shot above where you see a tall building in the haze begins a sequence where a character's car starts falling apart bit by bit as he's driving. His next right turn lands him in a neighborhood of Spanish Colonials and Tudor-esques from the 20s or 30s and another right turn (or two?) has him crossing Edgemont: 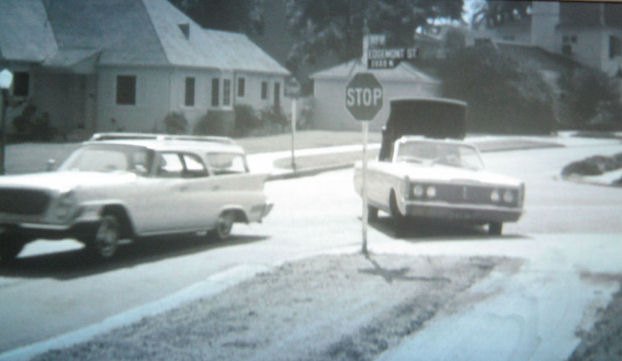 I think this must be this must be "movie magic" rather than geographic reality. Thanks for helping out, everybody!
by gwdiener
I'm agreeing with Trousdale Estates. That could be Sierra Towers in the one shot. I can't think of a tower that high over by Fairfax (below Mt. Olympus).

Paul Trousdale bought most of the Doheny ranch (400+ acres) in the 50s from Lucy Doheny-Battson so a lot of the houses in that neighborhood are MCM. The remaining part of the ranch is now the city park with Greystone Mansion.
by bamalama
Thanks again-- next time I'm down south I'll have to take drive around to see if I can find it. (If I can, that is, isn't part of it gated?) Another Trousdale question: is the house that Allen Siple designed for the Trousdales actually in Trousdale Etates?
by gwdiener

by modfan
that 60's Chrysler station wagon with the slanted headlight styling and the tailfins.
by Futura Girl

I watched the movie

by modfan
Did a screen capture and drove around Trousedale Estates.
Sad to say that the house has been remuddled (a la home Depot) still 1 story
but now fenced and gated but the style is now 'Persian Palace'. I figured it from the light post-it could only be on a street (the properties for the most part are only on one side of the street) with the light post is one the property side plus the view (now obscured somewhat by trees) of the hill in the background and the view is of houses across the cross street (again now somewhat obscured by mature landscaping) sloping down.
it's the 2nd house on Haynes off of Arkell.

And yup there are many remuddled homes (money doesn't = good taste)
and a few ongoing constructions there, but still a lot of gems. No it's not gated there is some subdivison signage-stone walls at the street entrances.
BH has no hist. preservation ord. but there must be a tract CC&R or something because there are almost no 2 story or multi story homes there.
by bamalama
Thanks so much for checking it out, Modfan-- you're the tops! Stellar detective work. Next time I'm down that way I'll definitely take a tour of the neighborhood. It's a shame about the Home Depot-ization, but I suppose that was to be expected.
Cheers,
Jean
by Udo Min
Somehow this house reminds us of the house in Ray.
the Ray Charles film...
Could it be a similar style or build...
by MD²

by modfan
That's not the house, I thought it was too, looks like it but there's a garage that can be seen and if it was the adj. road would slope down the opposite way from the film, and no curved drive, unf. it's the one across the street with the circular roof.
So that's the reason for no 2 story's well at least there's some restriction.