While going to college, I would pass this house every day on my way home. You can't actually see this house while driving up Millbrook. All you can see is the garage. Nice to know it's still there and looking pretty good.

Very cool. I must admit I don't know anything about this architect. Do you have some more info about him?
Top

Harwell Hamilton Harris (1903-1990) was born at Redlands, California, on July 2, 1903. Although his father was an architect of some local repute, Harris, who later became one of the most influential architects of his generation, initially spurned architecture. He began his studies at Pomona College but later dropped out to study sculpture at the Otis Art Institute in Los Angeles. When a fellow student there encouraged him to visit Frank Lloyd Wright's house built for Aline Barnsdale in Hollywood (1917-21), Harris saw and was deeply moved by the sculptural possibilities of architecture. After deciding to become an architect, he went to work for the Viennese Ã©migrÃ© architect Richard Neutra, who put him to work on one of the monuments of modernism in this country, the machine-inspired Lovell Health House in Los Angeles.

On his own in the early 1930s, Harris made a reputation with small homes for artists and intellectuals (including John Entenza) that combined the sculptural and natural elements he had admired in Wright with an appreciation, learned from Neutra, for machine-made, prefabricated modern materials. These were his underlying influences, but his sensibility grew out of his love of the landscape and a feeling for the simple delicacy of spirit in the Japanese structures he had grown up around in southern California. His work was characterized also by a sensitive use of wood, in which structural details were frankly celebrated, and by a conviction that a floor plan should follow, support, and inspire the patterns of his client's lives.

After receiving critical acclaim with his first house, the 1934 Pauline Lowe residence, he met Jean Murray Bangs, a graduate of the University of California at Berkeley who was doing social work in Los Angeles. They were married in 1937 and lived in one of Harris's most admired residences, the Fellowship Park house of 1935, which was little more than a pavilion in the woods. In 1940-41 Harris designed his masterpiece, the Weston Havens house, a dramatic geometric form of inverted gables hovering above San Francisco Bay. Afterwards, Harris's natural affinity with the work of Greene and Greene found increased expression in such designs as that of his Ralph Johnson house of 1948.

Harris was something of a celebrity when in 1951 he became the first director of the School of Architecture at the University of Texas in Austin, which had just been separated from the College of Engineering. By 1955 he had hired teachers and shaped the curriculum, but perhaps even more significant was his local work. The House Beautiful Pace Setter house, exhibited at the State Fair of Texas in 1954, involved student participation; less-publicized work in Austin, such as the homes for University of Texas professor Thomas Cranfill and David Barrow, Sr. (both built in 1952), also made an impact on young Texas architects.

After leaving the University of Texas, Harris practiced in Fort Worth and in Dallas before leaving Texas in 1962 to teach at North Carolina State University in Raleigh. His most significant and representative work in Texas includes the 1956 Ruth Carter Stevenson house and Greenwood Mausoleum in Fort Worth; the Dr. Seymour and Jean Eisenberg residence (1957), the Trade Mart Court (1959-60), and the First Unitarian Church (1961-63) in Dallas; and, in West Texas, the 1960 St. Mary's Episcopal Church in Big Spring, the 1959 residences of Dr. and Mrs. J. M. Woodall and Dr. and Mrs. Milton Talbot in Big Spring, and the home for John Treanor in Abilene, also in 1958-59. Harris retired from teaching in 1975 but continued to practice architecture until just before his death at his studio-home in Raleigh, North Carolina, on November 18, 1990. 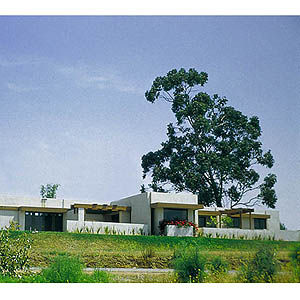 Great pix and information. Thanks ... I'll have to read more about him. Any other recommendations?
Top

Unfortunately, there are few collected resources on Harris' work. Besides Lisa Germany's book, there is a chapter in Esther McCoys book "The Second Generation", an article in Robert Winter's "Toward a Simpler Way of Life: The Arts and Crafts Architects of California", there is a collection of his writings in "Harwell Hamilton Harris: A collection of his writings and buildings " (North Carolina State College. School of Design. Student publications), a number of his houses are pictured in "The Ranch House" by Alan Hess, a note on the Haven's House in "NorCalMod: Icons of Northern California Modernism" by Pierluigi Serraino, and the Alexander & Havens' house is featured in "Modernism Reborn: Mid-Century American Houses" by Michael Webb and Roger Straus. Otherwise, you can find a listing of the original publications in Lisa Germany's book. Harris was well represented in period magazines and published house collections. Lisa Germany's book, unfortunately, does not list the collections. Start with Germany's book which is out in paperback by the University of California Press.
Ted Wells is working on a book featuring twenty two of Harris' houses to be published by Gibbs Smith Publisher in 2008.
Top

I'm building a site for the Friends of Havens House, a group that manages the H.H.Harris Havens House in Berkeley, CA. Where did you find these photos? If any of them are yours, I'd like permission to use them on the site, we need more pics of his other work.