nothing wrong with "porches"-

nothing wrong with "porches"-

There's really nothing wrong with "porches"-
per se except they could be better designed. J-

I'm curious what you consider a good porch design?

I love my front porch. And my side porch. And my back porch. It's great to have an outside, covered area when you live in the NW. My kids can skateboard and ride scooters around the three sides of our house and stay dry. Plus is gives us a place to leave muddy boots and have a little storage that is hidden from the road.

Porches are great, especially when the owner has a ratty sofa or a broken down refrigerator on it.

I find porches to be a waste of space. they often become dumping ground for bicycles, boxes, and trash. The New Urbanism theory that porches make good neighborhoods is wrong. people like their privacy. They don't necessarily want to see everyone's business on the porch.

I would rather see that space moved to the back or side for private outdoor living. I'll see my neighbors when we're walking the dog, going for a jog, or washing the car.
http://www.flickr.com/photos/barthlow/
Top

Our house is a slab-on-grade with
many ways to get outside easily.
In Japan, an engawa serves as a
all around porch raised above the
ground as yours is. Nice house. J-

I think Joe is starting to say my thoughts before I can even think them.

I too find porches to be generally useless, at least in the "traditional" sense of a three- or four-foot deep wasteland. My mom keeps plants on hers. Greenmod's seems big enough to be actually useful. I for one prefer to be able to simply walk out onto the land, and I actually have enough doors in and out of my house that I almost always have trouble finding either pair of my flip-flops (my house is shoes-free) when I want to head outside.

I know lots of my neighbors, but none of it has ever come from me sitting in front of my house.
Andy Perkins, Broker/Owner
Top

We don't sit on the front porch. No chairs (or ratty sofas) out there. We do have a large cedar chest that holds outside "stuff" (rollerblades, skateboards, gardening tools, etc) that I don't want to walk all the way around the backside of the house for (garage is on the back, roof of which is our very large back deck, we are on a steep hill). The best two things about the design of my porch is it is deep (6') and it doesn't have traditional railings but is sided like the house. It hides the ratty sofa

I am sure there are always exceptions to the rule (greenmod).

Those 'vestigial' porches aren't very useful they aren't very deep so putting 'outdoor furniture' on em is moot. But a deep one with a porch swing, that is nice. My grandma's house was that way and our house when we first moved to Claremont had one too.
Top

Deep porches are a problem
up here in the rainy Northwest
in that they shade the windows
too much. Skylights help unless
there's a second story. Jerry

Just a few blocks away from
my MI home. Far too many
deep dark porches up here in
the rainy NorthWest. Jerry

My house in Portland has a long front porch (more of a deck really due to the second story entrance, but the principle is the same), which I initially didn't like, but eventually came around to because it breaks up the front elevation a little bit. Until I can think of something better, it stays. I may just put a better looking railing on it and leave it otherwise unchanged. No comments about the sorry state of my lawn please (or the terrible white trim I still haven't painted), I know...

However, the porch on our house can at best be described as a decorative feature because (like several others have noted) we never use it. Nobody wants to sit out in front of their neighbors, especially if they have a nice private backyard. The builder or architect kept the eaves as short as possible, which allowed the porch to be reasonably deep without much of a sun blocking issue, but that comes with it's own problems in the soggy PNW. Two years ago I had to cut and sister most of the joists and replace a lot of the decking due to rot induced by years of water pooling and draining. Luckily, I got the joists fixed before the rot could progress into the house $$$ (same joists run from the center of the house all the way out to the front of the deck). Had the eaves been set deeper than the deck (instead of at the same depth) the deck would have stayed much dryer year-round, but the living room feeling like a cave.

A couple of interior shots, just to show the effect (or lack of effect) on sunlight in the living room: 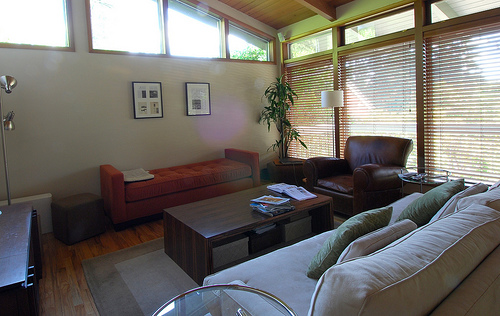 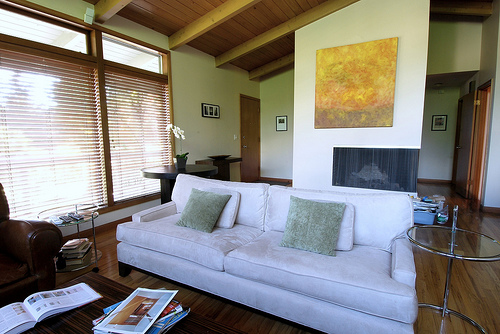 You are born modern, you do not become so.
Top

Presume EggMCM is in
Stuttgart on business-
military or other. When
he gets back should at
least remove the horiz.
2x4 at eyelevel- one of
my pet peeves. Jerry

Jerry, It happens to be business... Several aspects of that railing are high on the list for improvement in 2011!
You are born modern, you do not become so.
Top

I love porches. We visit Ellensburg, WA in eastern wa often. We used to live there, EVERYONE uses their porches for hanging out on a hot night, saying hi to neighbors... It is a walking town and that makes for a lot of people strolling by. Yes, they can collect crap but the same people will collect crap elsewhere too. I say, yay for porches!
Polite and Cordial
Top

Joe, Thanks-- like most of people's houses on this site it needs stuff, but it's getting there. This three year hiatus has been kind of a bummer in that regard, but it has other benefits, and it allows time to plan (very) carefully