I've searched around some but there isn't a whole lot out there about this - what kind of trim is recommended for mid century modern houses? Maybe something like this? 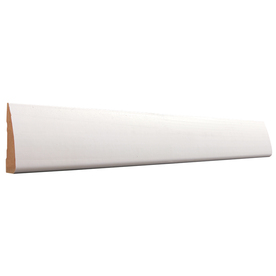 I'd look into what's original to the house we're moving into, but I'm afraid it's all gone. Current/soon to be previous owners replaced all of it a few years ago and put in huge crown molding, casing and baseboards. Here are a few pics ("stuff" in the pics all belongs to the seller, and none of it conveys):

Huge baseboards and crown molding in the entry

Family room: This used to be behind the house (2003 addition). Removing the columns is a pretty high priority too. In the longer term I'm going to raise the ceiling so that it slopes upward to the right, and remove the wall between this room and the kitchen (to the right).

Family room / Looking the other way:
The first thing I'm doing is removing the hole for the DLP TV so I can paint and get my entertainment center and TV where they belong. Sometime later the doorway is going away and this area will become a built in closet facing the hallway on the other side of the wall.

Anyway the background to this place is, it was built in 1959 and expanded in 1970 and again in 2003. Right now it's a ranch and nearly all original details to the place are long since gone. My wife and I have huge plans, and intend to go as mid century modern as the structure will allow as we renovate the house. I would've rather bought a MCM and saved us some of the trouble, but they're incredibly rare here and this one has a huge garage that I'd be unable to duplicate (I like playing with cars). This isn't the first house I've renovated, and I've been looking forward to doing one like this for a long time now. If everything goes according to plan, we close on April 11th.

Sorry for the long post and thanks for the help!
Top

That's it, called streamline. There was (is) also another similar one with a flat face instead of the rounded one. For base you could use just a block like what's there but without the fancy top. (when you remove the existing, there will be a line at that height you will either have to cover or resurface the walls)

In my house the drywall meets the door jam with drywall J metal. (but my jams are only as wide as a 2x4 wall) I have also seen walls brought to the door jams with a revel left. But in your case, not knowing what you will find adding simple casing will probably be the ticket.

It does seem crazy to buy that place and have to do that much work just to bring it back. But then again I paid for an extra garage when I bought my house.

See if there is a Habitat for Humanity re-store near you. If you remove the existing carefully, they will give you a good deduction receipt for it. that goes for all the horrible lighting fixtures too. I can just imagine what the kitchen looks like.
Top

Thanks! I'm really looking forward to seeing what paint lines tell me about what used to be there... There is very little texture to the walls but I'll have to match whatever is in place. Maybe we'll get lucky and find it behind the baseboards they put up.

Architecture in Charleston is very conservative so there isn't so much to choose from. There have been no MCM or modern contemporary houses for sale all winter or spring. It'll be fun doing another renovation, and it's a great starting point in terms of condition and size of the place and what we're paying for it.

I've been by the nearest Habitat a couple of times to check out what they have. Lost of '80s and '90s stuff mostly, but they do have a couple of doors that I'm hoping will fit. I'm sure they'll enjoy getting a truckload of molding sometime this summer.

The kitchen has the original cabinets painted white, but the doors have "new" surfaces installed, pulls in the dead center of each door, and green marble (formica) countertops. The sellers also had dentil molding installed along the top of the wall cabinets. There are two tiffany style lights hanging from the ceiling to complete the look. It's a mix of '70s-2000s stuff so the kitchen will also be a redo. Plans are to expand the kitchen into what was originally the eat in dining area and also add a pantry in that space. Right now there's a real lack of storage in there and the space the kitchen is growing into has no other use anymore.

If you can believe it, I actually find stuff like this fun.
Top

We also have a simailr trim in our 1964 MCM ranch.
Top

homes of this period did not use decretive moldings. if you cannot find what was original, I suggest you get some period shelter magazines from the year your house was built and examine the house photos in detail. you'll find simple stuff, or nothing used in most cases. they can serve as an example. Look at Sunset, BH&G, House Beautiful... you can find them on ebay for cheap.

decretive moldings are exactly what Mid-Century Modernism was not. Even if your home was not of Modern design, elements of simplicity carried over into other styles during that time.

my base trim is my 1955 ranch home is a simple rectangle piece of wood. I was able to replicate myself. not hard. the trim between the ceiling and beams was a triangle piece I was able to replicate on a table saw as well. again, I am not a carpenter. just someone who cannot afford one

Cool, looks like we're on the right path. Thanks for the ideas and pictures for reference!

Assuming the bank or sellers don't screw up the short sale anyway... once upon a time in January it was advertised as being ready to go and able to close just like a normal sale (the bank already preapproved everything). Then later we found out there was a mortgage and a HELOC but there was a verbal OK and we still had a closing date of 4/11. And yesterday we found out the bank just now got everything they wanted on the 2nd and should get back to us in 10-14 days from last Friday with their decision on that (where'd the approval go???), so now we're late April. Allegedly that's the last hurdle but I've heard that already.

I've looked at backups but there's not a lot out there. Today was a 1960 ranch that would need to be taken down to the studs and floor joists to fix every kind of problem that you could think of. I did grab a couple of pictures of the pink and gray bathrooms though even though it's not our color scheme, and had a look at the baseboards too. I'm hoping for the best...
Top
Post Reply
7 posts • Page 1 of 1