My new House in Dallas

My new House in Dallas

Just wanted to stop by and share (show off)

my new house in Dallas. The house is in an area of the city called Lake Highlands.

The house was built in 1961 by a builder called Ju Nel. Ju Nel is perhaps the most significant builders of MCM homes in Dallas. They had a run of 5-6 years where they built around 50 or so of the greatest MCM homes the city has to offer. They were heavily influenced by Frank Lloyd Wright and stood for all the greatest things that we all love about MCM homes. Embracing Nature, alternative building materials, clean lines etc.

Our new home was built for the founder of one of the largest Terrazzo floor companies in the US. As such, the ENTIRE house is floored with the most beautiful poured Terrazzo with sea shells. The Terrazo starts in the front entry and goes throughout the house and into the back patio. We're talking 2500sqft or so of the stuff!

OK, enough words. Here are the pics! We plan on doing quite a bit of work to the place so I'll update with the "after" shot as we progress.

Here is the front of the house. The lot is heavily treed . The house sits on a hill with a cool circular drive. 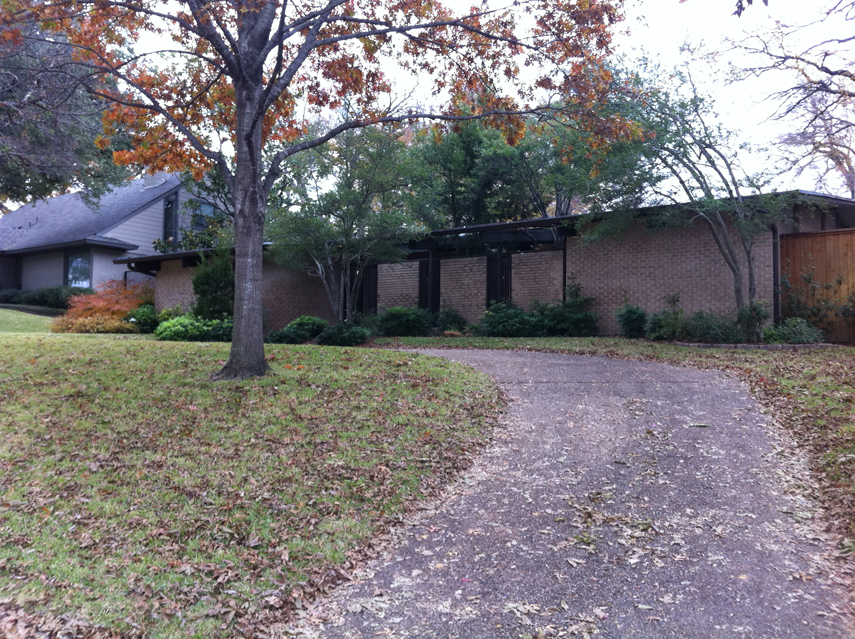 This is the entry with a neat asian-influence courtyard/garden. There's definitely an asian vibe throughout the house. We love the big red doors! 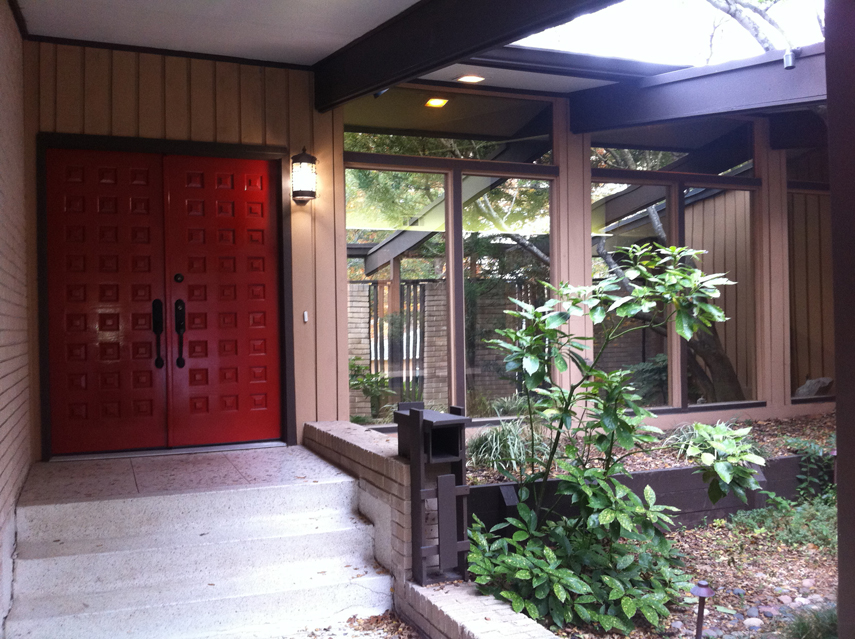 Here's a shot of the courtyard. The exposed rafters run through glass walls on either side of the house creating a very open feeling. The little fountain is a great touch. 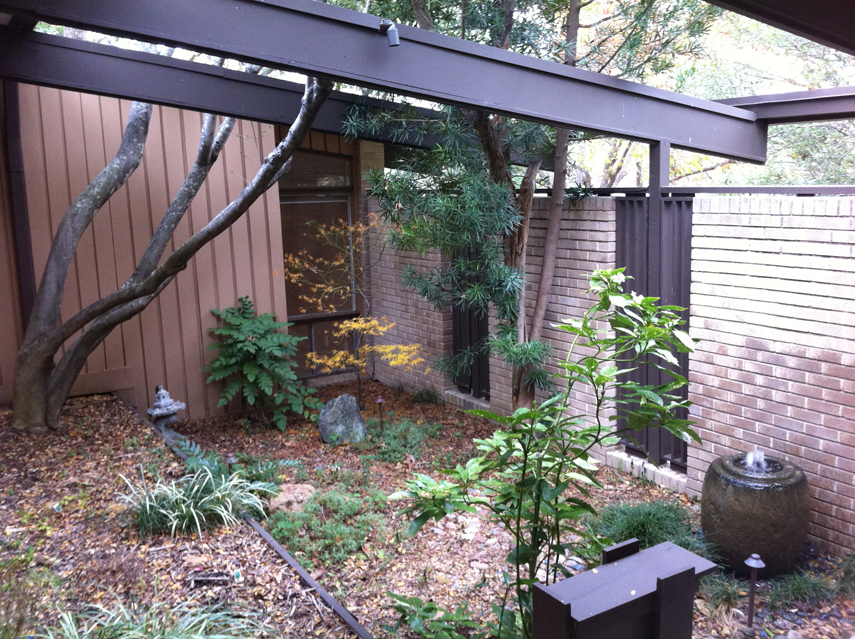 This is the copper fireplace. Perhaps my favorite feature of the house. This is also a pretty good shot of the floors. 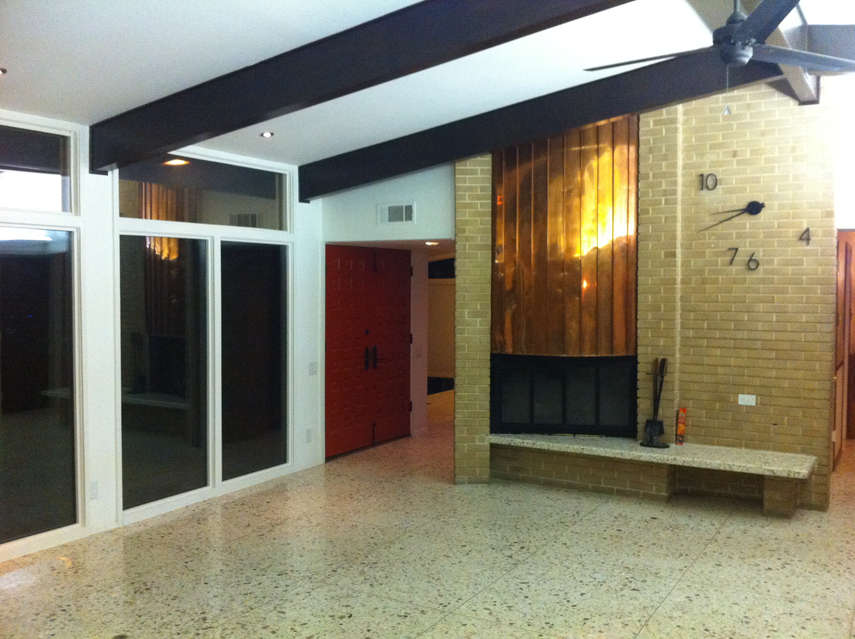 The other end of the great room features this wood wall. Not sure what type of wood this is, but I'm told Ju Nel imported this wood from South Africa. Notice the steps down to the bedrooms 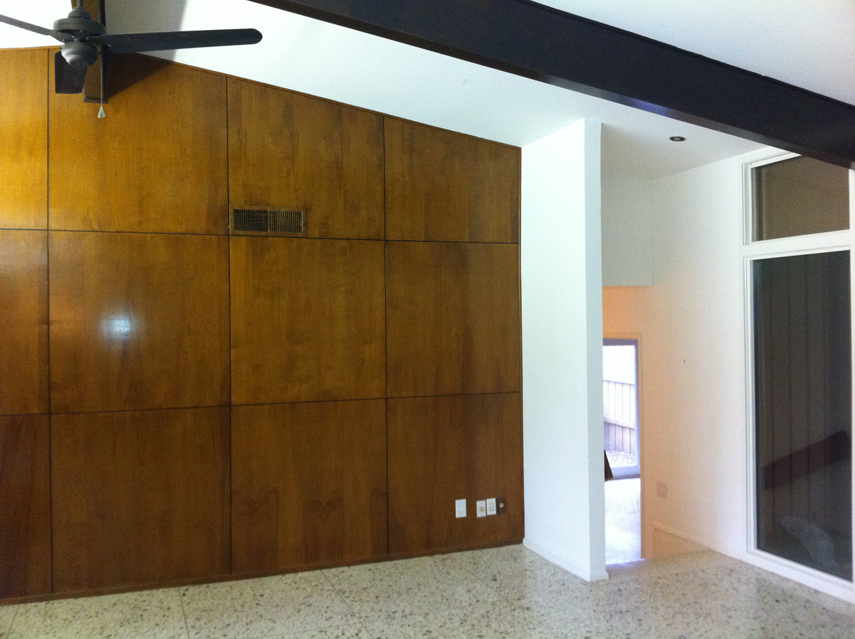 This is the sunken casual family room. my brother in law is checking out the original floorplans. 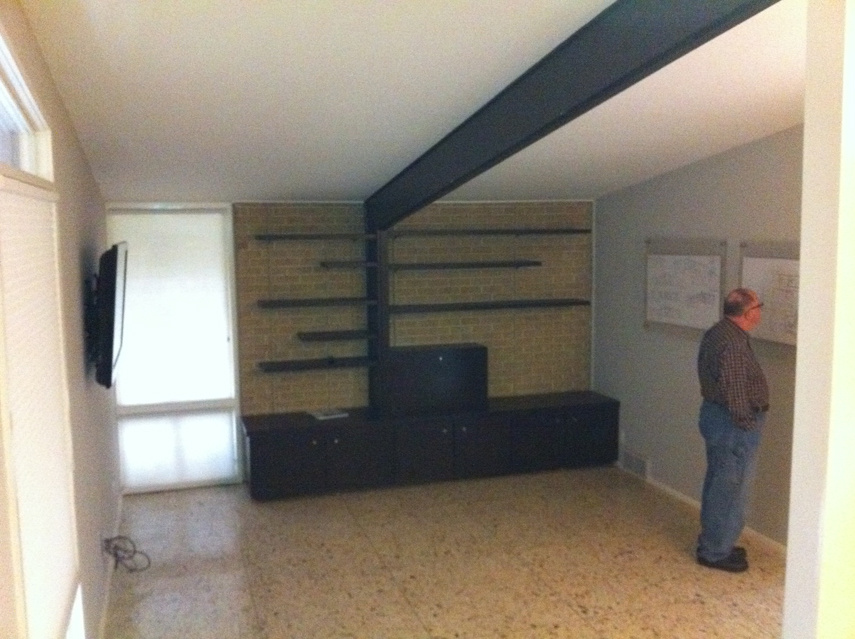 This shot is from the family room back up into the dining room. That cool wood wall is actually a giant coat closet. The original house had a wooden screen protecting people from falling to their death from the dining room. We'll be re-building that.

The kitchen isn't worth showing as it was "re modeled in the 80's. We'll be addressing that in January so stay tuned! 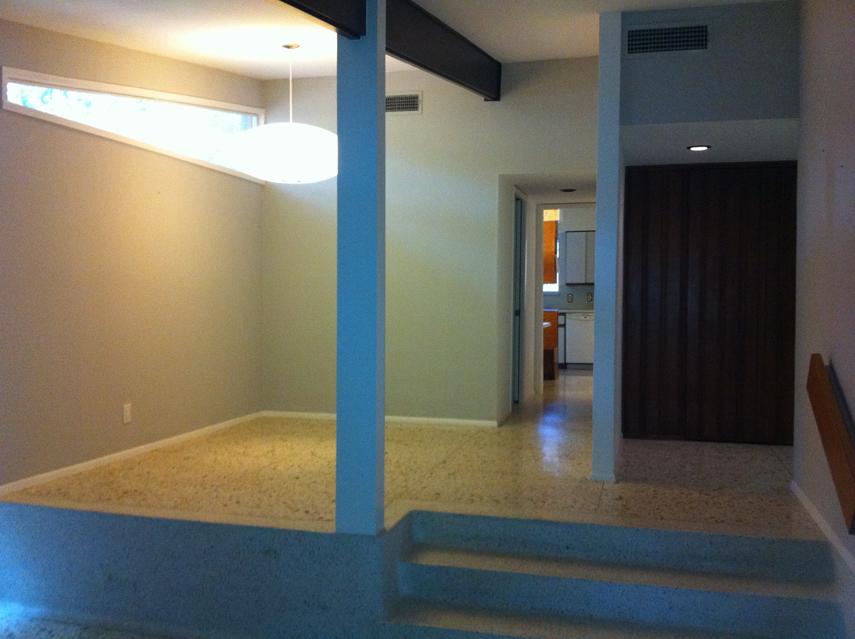 Here's the master bedroom. That sliding door leads to a private master garden... 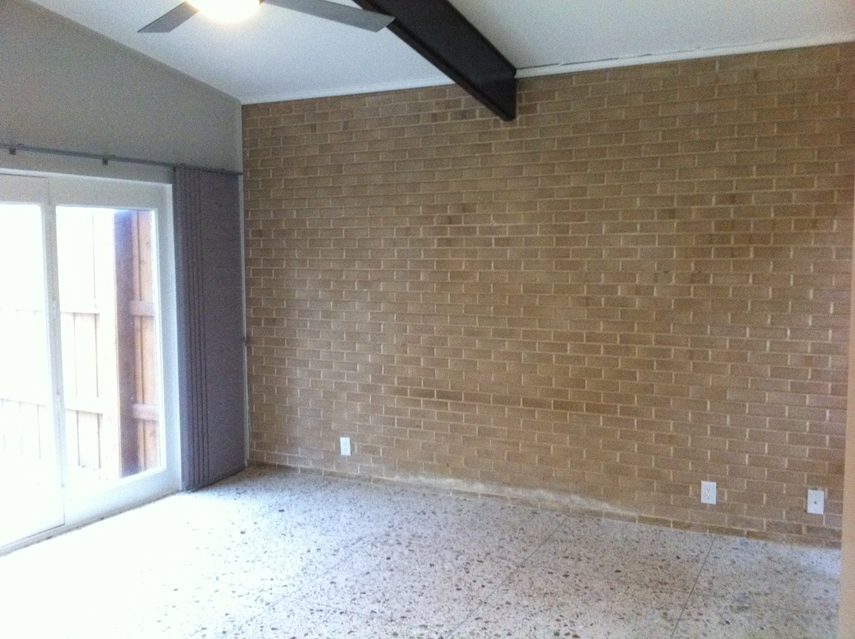 Which includes a hot-tub time machine! 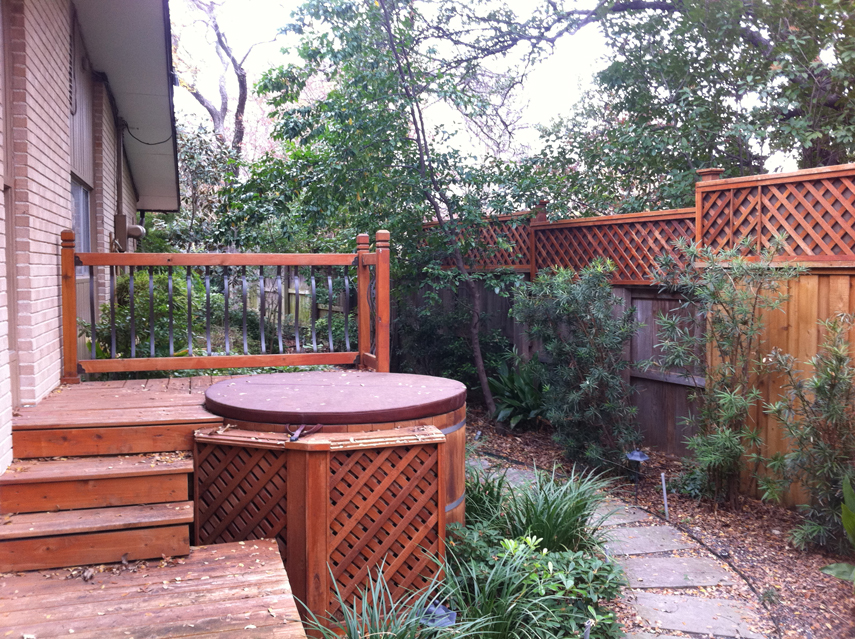 Here's a shot of the backyard. It's designed perfectly for entertaining. We love how the whole back of the house can open up. 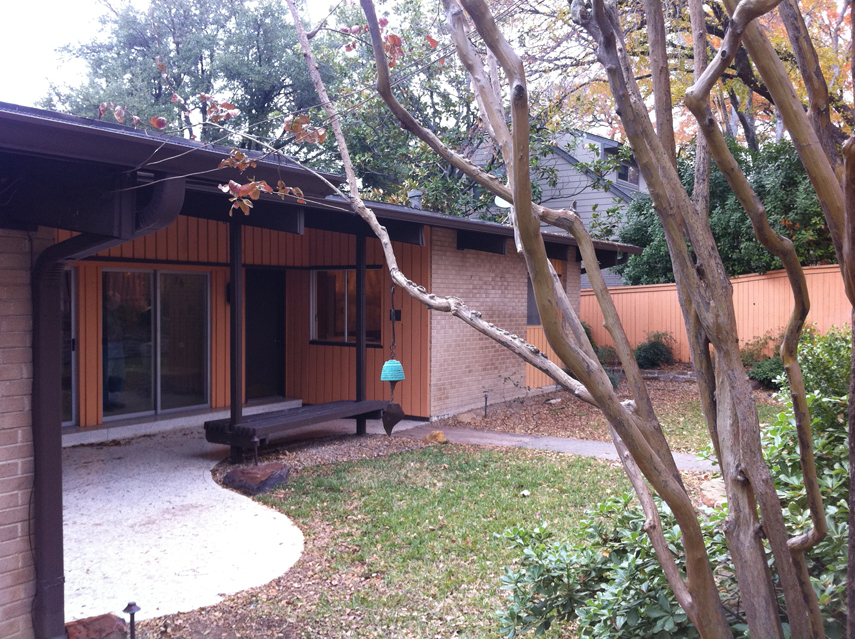 Finally, here's a shot of the guest house. The guest quarters has a full bathroom and kitchenette. I suppose this is where I live when the wife gets mad at me for taking on too many projects at the same time.

There's a car port to the left of the guest house. 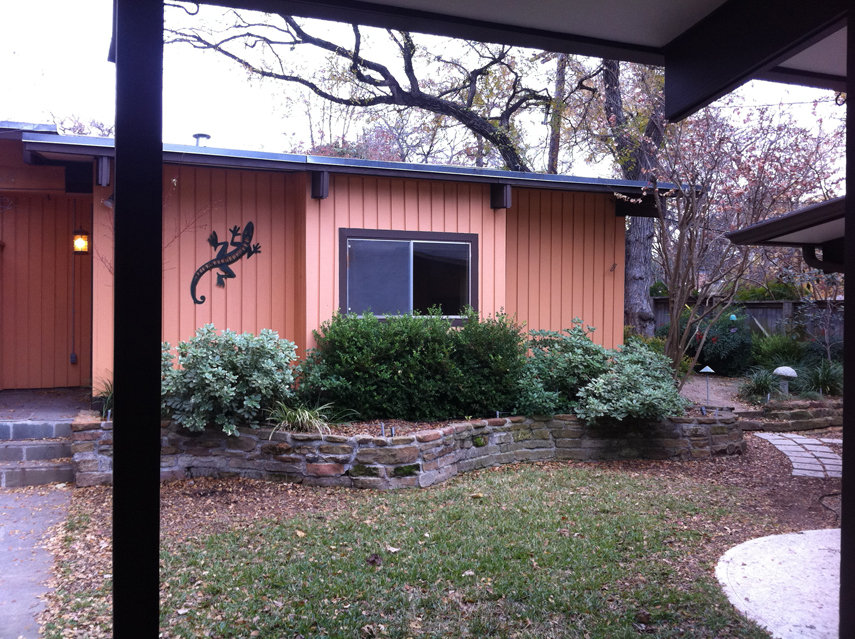 Well, that's it for now. All feedback, comments and suggestions are more than welcome!
Top

hey, someone stole some numbers from your clock (just kidding)

you going to rip out (and maybe redo) that hot tub/deck that looks like another 80's 'improvement'?
Top

Congratulations!! I love Ju-Nel houses!
When did you close? I swear I saw that one in the listings our realtor sent us a few years ago (it was out of our price range).
Top

Thanks for the kind words about our new home everyone and happy holidays!

It's been a busy couple weeks getting moved in.

We closed on the house a couple weeks ago. The house wasn't listed on MLS. I found it listed on zillow as "make me move". I contacted the owner to see how serious he was and turns out he was starting a new company and wanted to downsize. It was an incredibly easy transaction with no agents involved. I know he was sad to say goodbye to the house, but happy it was going to someone who would take care of it.

We've already started buying some furniture. We found a cool Broyhill Brasilia cradenza and ordered a new sofa, love seat and sectional for the two living areas. We went with a manufacturer called Younger Furniture. They make some really good quality stuff that looks vintage and won't break the bank. Here's the sofa and love seat we ordered.

I can't wait to see them in the fabrics we chose!

The kitchen remodel should be starting in the next week or so. Just working out the final touches with our contractor. We're leaning towards vertical bamboo cabinet fronts similar to this:

I reached out to the owners of the terrazzo company whose founder originally owned our house. I spoke with the man's son and it turns out that he and his three brothers who all lived in the house still all run the family business. He was really excited to hear about his old house and he'll be coming by in the next week or to help figure out what to do with the flooring in the kitchen. He had some great stories to tell about growing up in the house. So cool!

Will update once kitchen construction begins!

GREAT looking house, and yes, that fireplace is brilliant! You'll need to get a '2' put on that clock so you'll know when to drink your Dr. Pepper...
Top

Very nice house! LOVE the terrazo! and that kitchen will look stunning!
Top

awesome house. i'm sure we'd all love to see the progress that you've made on the remodel. i'm so jealous of your terrazzo floors!

also, have you heard of the modern home tour that hexter elementary puts on every year? this year's tour just happened but your home is exactly the sort that they feature. i know they've had a ju-nel home or two on past tours. check out their website for more info.

Well, it's been a year since I first posted about our house. We've been Busy! The biggest project involved the kitchen. We took the old 80's remodel down to the studs. We even had the son of the original owners come in and jackhammer out the old floors and pour new ones. The kitchen is all ikea base cabinets with custom-made walnut doors. The pendant lights came out of a demo house somewhere in California. I ended up doing the bulk of the work myself to save on money. Took a little longer than I'd like, but we love the results.

So. Here's what it looked like when we moved in a year ago:

and here are the afters

Over the last year I've become quite obsessed with vintage furniture. In the photos above you can see the Erik Buck Bar Stools I found and recovered.

Here's the living room now. The sofa and love seat are from a company called Younger Furniture. The coffee and end table are vintage Lane Cosmopolitan line. The Hans Wegner Shell Chair is authentic and the credenza is a Broyhill Brasilia. We've finished up a couple other rooms that I'll update this thread with once I upload some more pics.

We LOVE our home and still can't believe we're lucky enough to live there.
Top

great job! the kitchen looks great! You really have done a great job. Those old white cabinets were really out of place. By chance, do you have some "after" photos to match some of the above before photos?
View my documentation blog:
Top

Thanks for the complements! The kitchen is so much more functional now.

The "before" picture above is pretty much the same angle as the first "after" shot. The oven is now where the booth used to be.

Here's another before shot that shows the other part of the kitchen. It should give you an idea of what changed layout wise. I can't imagine how people survived with the kitchen for 20 years the way it was. We had to live with it for a few months and I wanted to take a sledgehammer to it every day.
Top
Post Reply
17 posts • Page 1 of 1

Users browsing this forum: No registered users and 9 guests